Time for Hard and Fast Standard on When Cops Can Kill 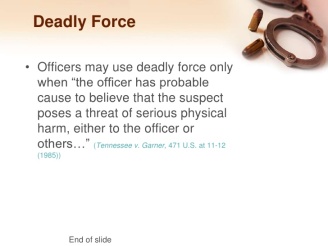 In quick succession, an El Cajon police officer gunned down an alleged mentally challenged man, a Tulsa police officer gunned down a distressed motorist, a Charlotte, North Carolina officer gunned down an allegedly combative suspect, Pasadena, California police officers violently restrained a distressed man who allegedly became combative and he died, and a Los Angeles police officer killed an alleged fleeing auto theft suspect. These violent deaths at the hands of officers have two things in common. They stirred furor, rage, and protests because the victims were Black males. But it’s the second thing that has drawn almost no attention in these cases that deserve the most attention, and more importantly some answers. That’s the tormenting, and still mostly unanswered question, just when can and should a cop use deadly force?

There is no uniform national standard of what is or isn’t an acceptable use of force in police slayings. It almost always comes down to a judgment call by the officer. In the Rodney King beating case in 1992 in which four LAPD officers stood trial, defense attorneys painted King as the aggressor and claimed that the level of force used against him was justified. This pattern has not changed in a number of celebrated cases since then. Police claim that they feared for their lives in confronting civilians and they use deadly force solely in self-defense. In the rare times an officer is charged with the wanton use of deadly force, and is brought to trial, judges and juries, almost always buy the line that the level of force was necessary to save the officer’s life or prevent injury or harm to other civilians. Judges either dismiss the charges. If it goes to a jury, it usually quickly acquits the officer or officers charged. But just what exactly is the level of force that’s permitted to convince a judge and jury that the deadly force is legal and necessary?

The courts haven’t been much help. A 1985 Supreme Court ruling did say that police officers can’t simply kill a fleeing suspect simply because the suspect is fleeing. There has to be a proven immediate threat to the officer or others for deadly force to be justified. That didn’t do much to clarify the issue, since an officer can easily make the case that the suspect had committed a felony or serious crime and that alone made him an immediate risk or threat to the officer and others. A 1989 Supreme Court ruling muddied the picture even more when it ruled that the test of reasonable use of deadly force is “not capable of precise definition or mechanical application.” In effect it punted the issue back to police departments to determine when deadly force can and should be used. Some police departments such as the NYPD and Philadelphia PD picked up on that 1985 court ruling and made it policy that officers can’t take shots at a fleeing suspect simply because the suspect is fleeing. However, it’s still a subjective call by the officer over whether the suspect’s flight could result in the commission of more crimes that could result in harm to others. If the officer shoots, it’s almost certain that the officer would not be prosecuted for making the judgement call that killing was necessary, no matter whether the suspect was armed or not.

Even when police departments spell out exactly when an officer can use deadly force, that policy is not a ready part of the public record, that’s open and accessible to all. There’s also no public disclosure of how the department’s rules on the use of deadly force are made a part of the officer training, and follow-up training, to drill home to officers that there are indeed strict guidelines that must be adhered to when an officer can shoot to kill.

The recent police killings that ignited massive protest are glaring examples of how judgements are made that may have absolutely nothing to do with the actual imminent threat standard or test for the use of deadly force. The officers claimed a gun or knife was present, that they feared for their life, or that there was a flight and a chase that endangered others. Whether there was a true imminent threat mattered little, it was just the officer’s word that it did that counted, and a life was taken.

The National Institute of Justice has put on paper a uniform summary of when and what level of force officers should use. The steps range from no force, verbal commands, bodily force, non-lethal weapon use such as pepper spray, Tasers, and wooden bullets. These are the things on paper anyway that an officer must use before opening fire.

However, the gap between what’s on paper and what officers did in the Tulsa and El Cajon killings is wide and deep. Without uniform and rigid guidelines that spell out when an officer can use deadly force, and spell out the punishments for violating the guidelines, the lines will continue to be blurred and the killings will continue—legal or not.

Earl Ofari Hutchinson is an author and political analyst. He is the author of How “President” Trump will Govern, (Amazon Kindle) He is an associate editor of New America Media. He is a weekly co-host of the Al Sharpton Show on Radio One. He is the host of the weekly Hutchinson Report on KPFK 90.7 FM Los Angeles and the Pacifica Network.