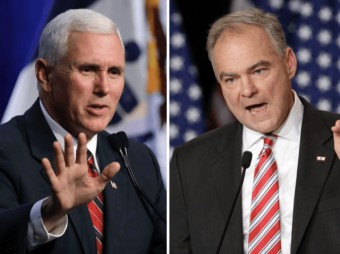 At first glance, the question: Do vice-presidential debates really matter seems ridiculously easy to answer, a resounding no. In VP debates between 1976 and 2008 as measured by Gallup polling, VP debates have made absolutely no difference in boosting the fortunes of the presidential standard bearer. The debates have been seemingly so inconsequential that it took decades since the first vice presidential debate to get any real public attention. The big breakthrough finally came in 2008 in the VP debate between GOP VP contender Sarah Palin and Democratic VP contender Joe Biden when nearly 70 million viewers tuned in.

The mass interest in the debate had probably more to do with the historic candidacy of then presidential candidate Obama who if elected would become the first African-American president, and the unorthodox, even kooky candidacy, to many of Palin. Certainly GOP VP contender, Mike Pence and Democratic VP contender, Tim Kaine aren’t saddled with the near historic high negatives of Trump and Clinton, and the mass of hits that both have taken for taxes, foundations, emails, obnoxious digs at each other’s supporters. So Pence and Kaine really do have much to talk about and much to defend and more importantly, put the best face possible, on Trump and Clinton.  They’ll get a good viewing crowd to see what they have to say about their leaders.

But beyond a VP debate, that still leaves the dangling question whether VPs really do count for much in the larger political equation. Yes and no. No in the sense that voters don’t vote for VPs they vote for presidents first and foremost. Most know that a VP does not make policy, if lucky maybe consulted on a policy question, and certainly does almost nothing to implement it. It’s not exactly a ceremonial position but other than stepping in in the event of a catastrophic illness or death of a president, it’s not far from that.

However, the vice presidency does have a lot of value in other places going back to the 1960 election. That year John F. Kennedy picked Lyndon Johnson in 1960 as his running mate. Kennedy was a moderate, wealthy, erudite, Massachusetts senator who needed the southerner Johnson to assure the popular and electoral votes of the South. Since then presidential candidates have picked carefully their running mates for balance on gender, region, and age, and in the case of Pence, temperament value in wild contrast to the off the rail, shoot from the lip, Trump. In the case of Kaine, gender, age, and trust value in relation to the horrible’ly deep public perception of Clinton as everything from a chronic liar to simply untrustworthy.

Trump and Clinton had to have VPs that had few negatives, solid party insider status and ties, were fairly young, and as an added boost seen as good governors and good administrators. The youth and good administrative skills factors can’t be minimized since Clinton and Trump are at or near age 70, and would be nearing 80 if they got two terms in the Oval Office. If there was a health challenge to either one in office, voters would want assurance that a vice president would be able to hit the ground running at the top if that happened.

Neither Pence or Kane will add anything to rallying and mobilizing Trump and Clinton’s core base, or are needed in the lock down GOP and Democratic vote states. But there’s the independents. They now make up more than forty percent of the general electorate. This is a historic high. Trump and Clinton engender towering doubt and skepticism among a big swatch of them, they could be the X factor in a close vote in the half dozen must win swing states that will decide the election.

Here’s where Pence and Kaine could help, sans their negatives, and possessing sound administrative skills, are undoubtedly major selling points with many independents. Kaine and Pence will spend a lot, if not most, of their remaining days on the campaign trail, in those swing states wooing, courting, and talking rationally about the tax, trade, and job creation policies that Trump and Clinton are pitching to the independents and waverers. The idea is to show that they will bring the required straight forward, steady hand to the administration team in the White House.

The single biggest asset, though, that a VP pick brings to any presidential table is that he or she can turn on more voters than their potential boss can or has turned off no matter what part of the country they hail from, their gender, or their rank in the party. Pence and Kaine were tapped precisely because both were seen as being able to accomplish that tricky feat.

This election go-round that’s more important than ever since the VP must be more than someone who won’t harm the ticket but someone who will actually help the ticket win. The only way that can be done is for both to be showpieces for the qualities that many voters think Trump and Clinton sorely lack.

Earl Ofari Hutchinson is an author and political analyst. His latest book is From Sanders to Trump: A Guide to the 2016 Presidential Primary Battles (Amazon Kindle) He is an associate editor of New America Media. He is a weekly co-host of the Al Sharpton Show on Radio One. He is the host of the weekly Hutchinson Report Saturdays 9:00 AM on KPFK 90.7 FM Los Angeles.