An Explosive Look Inside the Trayvon Martin Slaying

Author and Nationally Syndicated Columnist Earl Ofari Hutchinson contends that the Trayvon Martin slaying has been firmly and indelibly embedded in America’s public mind as not just the personal tragedy of a young life needlessly lost, and the tragedy of a man who thought he was doing his duty to protect a community. It is 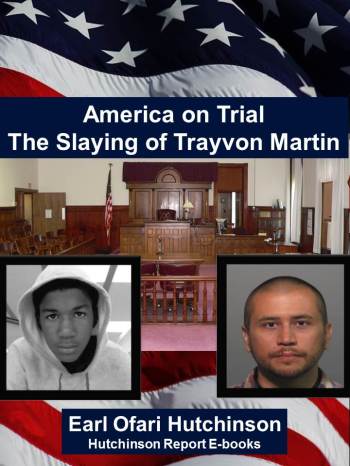 now a tragedy that ignited a national soul search.  The Martin slaying put race, media sensationalism, stereotypes, and the criminal justice system, squarely on trial. These towering issues are the focus of his new e-book, America on Trial The Slaying of Trayvon Martin (Amazon Kindle) released on the eve of the trial of the man accused of killing Martin, George Zimmerman.

Hutchinson notes that the Martin slaying even caused a deep soul search over these issues by the White House: “President Obama had Trayvon Martin in mind at a White House press conference shortly after the killing.  He waited for the question that he knew was sure to come from the press about Martin. When it came he called the slaying a “tragedy.”  He expressed empathy for Martin by insisting that he would be proud to have a son like Martin. He ended by promising to “get to the bottom of this.”

In America on Trial The Slaying of Trayvon Martin, Hutchinson contends that whether Zimmerman wins or loses in a Florida courtroom, the Martin slaying stands as the latest in the never ending list of controversial cases that have forced many to think again about the always prickly and treacherous issues of race, crime, violence, stereotypes, the media, and the workings of the legal and criminal justice system.  The Martin slaying is not just about putting Zimmerman on trial, but America on trial.

In America on Trial The Slaying of Trayvon Martin, Hutchinson guides the reader through the many twists and turns of the case in the following chapters:

In a provocative view of Zimmerman’s odds in his trial, Hutchinson asserts: "The ultimate trump card that George Zimmerman’s army of defenders and Martin detractors could and would play was Zimmerman himself. He was very much alive, while Martin wasn’t. He could tell his version of the events that night in highly prepped and publicized interviews with the network media as he did on several occasions and tell the same story in a courtroom either on the stand or through his attorneys. He would continue to be amply armed with a storehouse of officially released and unofficially leaked “new” and damning information about Martin to bolster his version of the killing secure in the knowledge that there would be untold numbers of Americans who would believe him.

America on Trial The Slaying of Trayvon Martin presents the slaying and its consequences for the nation in its tragic, but revealing, light. The book will trouble you, enrage you, and provoke you, but above all it will make you think again about the never ending clash of race and the criminal justice system in America.

Get Your Copy Today -  http://www.amazon.com/dp/B00D5IGLIY

OLD SOUTHERN WAS OF DOING BUSINESS DURING SLAVERY AND AFTER,THIS TRIAL BROUGHT MORE LIGHT INTO THE RACIAL INJUSTICES MINORITY BLACKS HAVE ENDURED AS AMERICAN CITIZEN'S

THE TOTAL DISREGARD OF THE NRA TO HUMAN LIFE AND ESPECIALLY TOWARDS CHILDREN, WHO HAVE BECOME THE VICTIMS OF GUN VIOLENCE.

WHITE AMERICA SAY'S WE WANT OUR GUNS TO HUNT AND TO PROTECT OUR HOMES AND FAMILIES,YET THOSE FAMILIES GUN BEHAVIORS ARE IRRESPONSIBLE, GIVING A 5 YEAR OLD AND RIFLE UNSUPERVISED,ONLY TO SHOOT AND KILL HIS 2 YEAR OLD BABY SISTER

THE 47 YEAR OLD MAN ARRESTED FOR SHOOTING AN 8 YEAR OLD BLACK BOY, FOR WHAT MOTIVATION OTHER THAN HE WAS BLACK

WE NEED STRICTER GUN OWNERSHIP LAWS, AND THOSE OWNING GUN PERMITS NEED 3 YR MENTAL EVALUATION TEST, THOSE WHO HAVE LICENCES APPEAR TO BE JUST AS DANGEROUS AS THE ILLEGAL STREET GUNS.......SOMETHING HAS TO BE DONE IN SPITE OF THE NRA,VOTING THOSE OUT WHO LOBBY FOR NRA .....Daquan Breland: Suspect Charged With Murder In NYC Toddler’s Shooting Death [VIDEO] http://bit.ly/19wZs8c

White Man Cuffed For Shooting Black Child, 8, In The Facehttp://bit.ly/1emws6S SINCE THE TRAYVON MURDER THEIR HAVE BEEN OVER 100 GUN MURDERS ACROSS AMERICA ,ALL CHILDREN OF MINORITIES...................

GIRL FATALLY SHOT: Tiana Ricks, 6, died Sunday morning after she and her father were shot at a SoCal home. Authorities are seeking witnesses to the homicide.

Palmdale girl brain dead following shooting | Video | abc7.com
abclocal.go.com
A 7-year-old girl was left brain dead after gunmen opened fire on her family following a fight at a Palmdale gas station.
WE MUST DEMAND A CLEAN UP OF ILLEGAL GUNS  HARSHER PENALTY, CLEAN UP THE JAILS OF NON VIOLENT DEFENDERS AND START LOCKING UP THE REAL VIOLENT CRIMINALS, GUN VIOLATORS T THE TOP OF THE LIST.................SOMETHING MUST BE DONE NOW