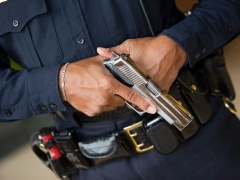 Public disclosure is critical to clarify for the public, stakeholders, the media, and affected family members exactly when, and under what circumstances officers can use deadly force. This has been the single greatest source of confusion, rancor, and hostility. Here are the key points in the LAPD police manual on lethal force.

Deadly Force.  Law enforcement officers are authorized to use deadly force to:

Warning Shots.  Warning shots shall only be used in exceptional circumstances where it might reasonably be expected to avoid the need to use deadly force.  Generally, warning shots shall be directed in a manner that minimizes the risk of injury to innocent persons, ricochet dangers and property damage.

Shooting At or From Moving Vehicles.  Firearms shall not be discharged at a moving vehicle unless a person in the vehicle is immediately threatening the officer or another person with deadly force by means other than the vehicle.  The moving vehicle itself shall not presumptively constitute a threat that justifies an officer’s use of deadly force.  An officer threatened by an oncoming vehicle shall move out of its path instead of discharging a firearm at it or any of its occupants.  Firearms shall not be discharged from a moving vehicle, except in exigent circumstances and in the immediate defense of life.