DeVos Richly Deserved Every Boo She Got 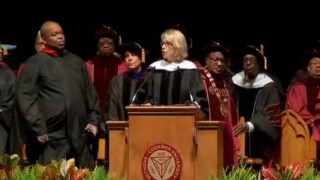 Last February, #45 Trump had a prized photo-op session in the Oval Office with a pleasantly smiling contingent of presidents and administrators of Historically Black Colleges and Universities. Trump gave the clear impression from the photo-op that he’d go out of his way to boost funding and support for HBCU’s. It didn’t take long to shatter that delusion. Trump signed an executive order moving the Initiative on Historically Black Colleges and Universities from the Department of Education into the executive office of the White House. In other words, into his hands.   HBCUs would in effect be at his mercy.

If he liked a particular HBCU, and its president, and that meant towing the Trump line on education and racial matters, then the college prez would likely find that his campus would be among the favored few in Trump’s politicized world.  In case anyone didn’t get the message of where Trump might go with his HBCU plaything, when he signed the stop gap trillion-dollar budget measure, he made a veiled threat to take a hard look at the Historically Black College and University Capital Financing Program. Trump seemed to think that singling out Black Colleges for special funding might be a race based measure that he and conservatives have waged a two decade long ruthless war to wipe all vestiges of off the landscape.

The howl from civil rights leaders and House Democrats was swift. They rightly noted that Trump ignorantly misunderstood or deliberately distorted what the funding measure for HBCU’s entailed. HBCUs designation as black colleges have nothing to do with a racial designation. It rests solely on their status as colleges and universities, their mission and their accreditation status. Trump quickly walked his crude threat back. He claimed that he had “unwavering” support for black colleges. But, it didn’t change the fact that his shift of oversight over HBCU programs gives him a say so over the affairs of black colleges. And, despite his flowery words about making HBCU’s his “priority,” he didn’t make them priority enough to add any more dollars to their funding.

Now we come to Trump’s Education Secretary, Betsy DeVos. It’s her mission to sell the Trump line and agenda on education which, put simply, is to swing the wrecking ball even harder and faster on public education. This means shoving every federal dollar he can to fulfill the conservative’s happy dream of dumping public schools for vouchers and school choice.

He found the perfect choice to make that happen in DeVos. Her long running war on public schools is well known. This includes bankrolling and chairing school choice lobbying groups, dumping millions into a national propaganda effort to sell school choice, plopping a failed referendum on the ballot in Michigan to siphon massive amounts of public school dollars to private and religious schools, and greasing the skids for her rich cronies to open charter schools on the taxpayer dime. DeVos has tried mightily to make nice with some of the HBCU heads who she and Trump believe will play along with their scheme to totally gut public education. The return to the Black College head that plays along with it is to have a sliver more of access to Trump, and dump a few more dollars in their school’s coffers.

DeVos’s invitation to give the commencement address at Bethune-Cookman University fit perfectly into the scheme. What didn’t fit was the reaction of the students. When they refused to act like cheerful, plastic marionettes and clap and cheer for DeVos on cue, the visibly flustered Bethune-Cookman President saber rattled the students by threatening to mail their degrees to them. This was not just a university president who was piqued at the supposed bad behavior of the students toward an invited guest speaker. The embarrassment of having Trump’s education emissary roundly booed potentially could have bad consequence for the university, namely the danger of Bethune-Cookman, and its president, falling off Trump’s most pliable black college list.

The students for their part should be applauded. They did what colleges repeatedly pay lip service to, and that’s that they want their students to think critically, be active and engaged in their community, and to be the committed leaders of tomorrow. They more than fulfilled that admonition when they made it clear that DeVos richly deserved their boos.