Guess Who Sessions’ War on Drugs Will Target 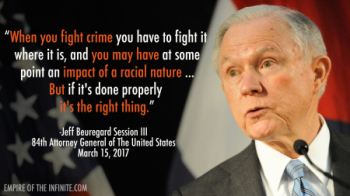 Attorney General Jeff Sessions made it official. The federal government will now reboot its war on drugs. The official word came down in the form of memos from Sessions that ordered federal prosecutors to cease and desist on the soft approach former Attorney General Eric Holder took toward prosecuting petty drug offenders. Now prosecutors must demand the harshest sentence, must use the threat to harshly pile on sentence enhancements to browbeat drug offenders into copping a guilty plea, and they must itemize the drugs an offender uses to insure they are slapped with the minimum mandatory sentence.

Sessions isn’t just talking about cracking down on the use of the hard stuff. He has a near paranoid obsession with pot.  He has railed against its use, thinks it’s one of the worst drug evils, and is convinced it is undermining the nation’s morals. Sessions has long chomped at the bit to cop the title as America’s number one drug warrior.  He took giddy delight as a federal prosecutor and a U.S. Attorney in putting the hammer to drug offenders whenever he could. Sessions would likely scoff at the frank admission by disgraced Nixon White House advisor John Ehrlichman, in an interview in Harpers in 1994, that the war on drugs was not about law enforcement getting a handle on drug sales and use, but another weapon to lock up as many blacks as possible.

From its inception in the 1970s, the war on drugs has been a ruthless, relentless and naked war on minorities, especially African-Americans. Former President Obama and Holder got that. And they made it clear that it was time to rethink how the war was being fought and who its prime casualties have been. They pushed hard to get Congress to wipe out a good deal of the blatantly racially skewed harsh drug sentencing for crack versus powder cocaine possession and to eliminate minimum mandatory sentencing. Congress didn’t finish the job and as long as Sessions is in the driver’s seat at the Justice Department it won’t.  The Obama and Holder reforms in low level drug prosecutions did produce positive, and dramatic results. The number of minimum mandatory sentences imposed plunged, and there was much more reliance on drug counseling and diversion programs for petty offenders.

You can kiss that good-by with Sessions. Even though countless surveys have found that whites and blacks use drugs in about the same rate, more than 70 percent of those prosecuted in federal courts for drug possession and sale (mostly small amounts of crack cocaine) and given stiff mandatory sentences are blacks. Most those who deal and use crack cocaine aren’t violent prone gang members, but poor, and increasingly female, young blacks. They clearly need treatment not long prison stretches. Obama and Holder understood that.

The fed war on drugs before Obama and Holder, and now reignited under Sessions, targeted blacks for a good reason. The top-heavy drug use by young whites — and the crime and violence that go with it — has never stirred any public outcry for mass arrests, prosecutions, and tough prison sentences for white drug dealers, many of whom deal drugs that are directly linked to serious crime and violence. Whites unlucky enough to get popped for drug possession are treated with compassion, prayer sessions, expensive psychiatric counseling, treatment and rehab programs, and drug diversion programs.

A frank admission that the laws are biased and unfair, and have not done much to combat the drug plague, would be an admission of failure. It could ignite a real soul-searching over whether all the billions of dollars that have been squandered in the failed and flawed drug war — the lives ruined by it, and the families torn apart by the rigid and unequal enforcement of the laws — has really accomplished anything.

This might call into question why people use and abuse drugs in the first place — and if it is really the government’s business to turn the legal screws on some drug users while turning a blind eye to others?

The greatest fallout from the nation’s failed drug policy is that it has further embedded the widespread notion that the drug problem is exclusively a black problem. This makes it easy for on-the-make politicians to grab votes, garner press attention, and balloon state prison budgets to jail more black offenders, while continuing to feed the illusion that we are winning the drug war.

This means little to Sessions. In his fundamentalist, self-righteous, puritanical world, drug users are the scourge of the nation. They must be swiftly and mercilessly removed from the streets, workplaces, schools, and any other place that their presence subverts the good upstanding morals of the nation. Sessions said as much in a memo when he claimed that his tough drug crackdown will “advance public safety, and promote respect for our legal system.” It will do neither. It will balloon prison building, the hiring and maintaining of waves of corrections officers, and further bloat state budgets. But worst of all it will again do what it was always intended to do and that’s be a war on minorities and especially blacks.

Earl Ofari Hutchinson is an author and political analyst. He is the author of the ebook How the Democrats Can Win in The Trump Era (Amazon Kindle).  He is an associate editor of New America Media. He is a weekly co-host of the Al Sharpton Show on Radio One. He is the host of the weekly Hutchinson Report on KPFK 90.7 FM Los Angeles and the Pacifica Network.