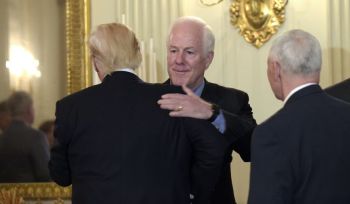 Earl Ofari Hutchinson
A conservative critic of the decision by the Texas Southern University President to disinvite GOP Conservative Texas Senator John Cornyn to give the commencement address at the university challenged me that this was a dangerous example of banning speakers students disagree with and compared it to the free speech movement of the 1960's when radicals routinely disrupted or prevented conservatives from speaking on campuses.
There's no comparison. First and foremost, I applaud the students AND administration at TSU for disinviting Cornyn and roundly condemn the President at Bethune Cookman for shamefully and gracefully inviting Uneducation Secretary Betsy DeVos to speak.
1. This was not a campus forum or lecture series where an arguable case can be made for free speech in inviting an unpopular speaker. This was a commencement ceremony. The established tradition is that speakers at commencements MUST reflect the spirit, values, outlook, and identification with the mission of the University, if not why else invite them. Cornyn and especially DeVos by their words, deeds, lobbying, legislative action and philosophy are AVOWED enemies of African-American interests. Could you imagine inviting a Neo Nazi to address a commencement at American Jewish University under the dubious guise of free speech???
2. The graduating seniors at HBCU's have paid a lot of money for their degrees in tuition, private donations, and endowment funding. THEY have a right to have a say in who will address them. 150,000 students, faculty, and alumni assn. members of BC said a resounding NO to DeVos.
3. The invitation of DeVos and initially of Cornyn to TSU was a nakedly pandering political choice to curry favor with Trump and the GOP conservatives. That is NOT why or at least it shouldn't be why speakers are chosen for commencement addresses.
NO, This is not a legitimate free speech issue or an issue of students heavy handedly banning speakers they disagree with. It's the diametric opposite. Graduating seniors who worked hard to earn a degree want and expect and deserve to hear a speaker in tune with their hard work, efforts, and, yes, view of the world inspire, encourage and reinforce them as they go forward in life. Not someone who is working overtime to destroy their vision and goals in life.