Next Up--Getting Another Scalia on the Supreme Court 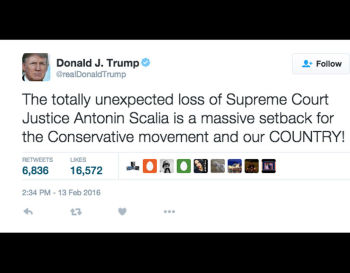 “I encourage you to consider seriously, for example, the repeal or amendment of section 5 of the Voting Rights Act, which is an affront to federalism and an expensive burden that has far outlived its usefulness, and consider modifying other provisions of the Act that have led to extraordinary abuses of judicial power.”

This is what then Alabama Attorney General William Pryor Jr. told a Senate Judiciary Subcommittee in 1997 looking at the impact of alleged “judicial activism” meaning opinions by moderate jurists that the right never likes. In 2005 he was confirmed as a federal appellate court judge. On the bench, Pryor has been the hardest of hard right-wingers in his rulings and opinions on abortion, gay rights, state’s rights, and countless crime and punishment issues.

Despite his impeccable hard right position, even Pryor may not pass muster as Trump’s ideal Scalia clone on the Supreme Court. His cardinal sin is that in two 2011 cases he actually upheld the rights of gays and a transgender woman in two discrimination cases, albeit on very narrow grounds. No matter, this made him suspect with the ultra-right. Now if Pryor flunks the hard right’s litmus test for Trump’s SCOTUS pick, then it takes no imagination to figure just what type of justice Trump might pick.

The names on his short list are cut from the same ideological cloth as Scalia and Clarence Thomas, who Trump also raved about as his kind of judge. They all have an impressive body of conservative rulings and opinions on hot button court cases. They all carry the good seal of conservative approval from the ultra-conservative Heritage Foundation. They are almost all white males, and hard line opponents of abortion, same-sex marriage, voting rights expansion, and increased federal regulations.

There are two, and only two, faint possibilities to slow down the hard-right takeover of the High Court. One is that the GOP Senate leaders want to get a justice on the court with as little political bloodshed as possible. And to do that Trump would have to dig into his short list and find a judge whose court record is the least odious, has a light paper trial of rulings and opinions, and has made no polarizing public pronouncements.  This directly ties to the other possibility which is to get the widest backing from Democrats to forestall any chance of a filibuster. The meetings that Trump has had with GOP and Democratic Senate leaders have been geared to get consensus on a pick who will not send everyone to their respective barricades in open warfare.

The problem with both possibilities is that hard right activist groups and the Heritage Foundation loudly demand another pristine, unabashed, ultra-conservative from his list.  Their willingness to go public in attacking an outspoken rightist judge such as Pryor sent the loud signal that compromise on the SCOTUS choice is not in their playbook. The Scalia replacement is only the start of the GOP’s SCOTUS long game.

Trump may have the chance to pick one maybe two more justices during his term replacing the two-aging liberal and a moderate judge on the court. If the right gets its way with a hardliner on the court the first go around, those picks will not just be garden variety strict constructionists, but activists and influencers on the bench too. They will be judges who won’t just base their rulings on the standard conservative playbook, but will cajole, hector and badger other judges to toe the hard-conservative line in their rulings.

This underscores a brute truth about the high court. Since the 1960s, the SCOTUS has been the right’s main prize since the tenure of Chief Justice Earl Warren. The right-wing routinely railed at the Warren court for its liberal rulings upholding and expanding civil and voting rights, labor, environmental and civil liberties protections, abortion, and reining in the corporate abuses. Conservatives viewed the Supreme Court as an unapologetic advocate of activist liberalism, and loathed it for it. The right plainly wanted more judges on the bench who would rigidly toe the ultra-conservative line. The court became even more important as a political tool for the conservative remake of the country when it became clear that just having more conservatives in the Senate and the House was not enough to roll back the gains in civil, women’s and labor rights of the past half century.

The right correctly saw the Supreme Court not just as a neutral arbiter to settle legal disputes. It was a lethal weapon to skirt congressional gridlock and serve a dual role as a judicial and legislative body. This meant scrapping the long-standing tradition on the court where justices based their legal decisions solely on the merit of the law, constitutional principles and the public good, and not ideology.

The criticism by the right of Pryor fits into the plan to insure total rightist ideological purity on the court. Getting another Scalia on the court is the key to making that a reality. Or as Trump bluntly put it when he spoke at a construction site for his new hotel in Washington, D.C., last May, “I’m not appointing a liberal judge.”

Earl Ofari Hutchinson is an author and political analyst. He is the author of Scalia 2: The Trump Supreme Court ( Amazon Kindle).  He is an associate editor of New America Media. He is a weekly co-host of the Al Sharpton Show on Radio One. He is the host of the weekly Hutchinson Report on KPFK 90.7 FM Los Angeles and the Pacifica Network.