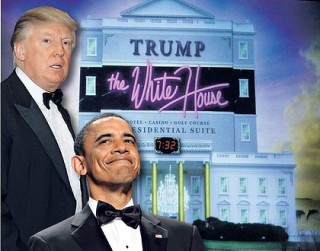 Front running GOP Presidential contender Donald Trump doesn’t utter the words “show me your birth certificate” in the same breath with President Obama anymore. But then again he doesn’t have to. He mined that fraudulent issue of birtherism hard and deep enough a few years back to get his mug, name, and point about Obama supposedly being un-American in front of millions of GOP voters. This launched the Trump traveling media and public titillation and entertainment show that currently masquerade as serious politics.

But none of Trump’s brash, loud mouth, neo-nothing, borderline racist jibes would have worked if it weren’t for Obama. The proof of this reared its ugly head again with the recent poll by Public Policy Polling.

It found that a plurality of GOP voters still say Obama is not an American citizen. And since in their eyes and twisted logic he’s not an American citizen it follows he must be a Muslim. In this case, the number of Republicans who say that is not a plurality, but a solid majority. Trump didn’t feed that notion. GOP presidential candidate Scott Walker did when he publicly mused that he wasn’t sure whether Obama was a Christian or not. None of the others in the pack of GOP contenders said anything of the sort at least publicly. But not one of them publicly rebuked Walker for saying it. The birther movement and the companion Obama is a Muslim belief never could or would die among the wide body of GOP voters as long as Obama sat in the White House. From the start, there was a canny, calculated, and politically cynical motive behind birtherism, the religion question, and Obama’s supposed foreign loyalties.

It started the instant that he declared his presidential candidacy in February 2007. Take your pick: He was too black. He was not patriotic enough. He was too liberal, too effete, too untested. He was a Muslim, terrorist fellow traveler, and a closet black radical. The shock of an Obama in the White House was simply too much for many to bear. Obama defied the stereotypical textbook look and definition of what an American president was supposed to look like, and be like; namely a wooden image middle-aged, or older, white male. That was just the tip of the iceberg. The real value of the silly Obama fed phony controversies was that it was a convenient and serviceable way to ridicule, undermine, and ultimately attempt to derail Obama’s policy initiatives on health care, the economy, and a reasoned foreign policy approach.

Fast forward to the 2016 presidential race. Stalking horse Trump and retired neurosurgeon Ben Carson have no defined program on education, health care, the economy and foreign policy. Yet they ride high at the top of the GOP polls. They’re at the top by tossing out pithy, outrageous, and bombastic sounding quips on any and everything that comes to mind with full knowledge they will grab headlines and draw even more rapturous applause from the anti-Obama loathers. But even better, their digs inflame, rev up, and stir, millions of angry, frustrated, and alienated GOP voters. The hope is that if they stay angry enough their anger will translate into a surge to the polls in November 2016. This is something that the GOP has not had in the past two presidential elections.

The rap against both John McCain in 2008 and Mitt Romney in 2012 was that both were much too traditional, establishment and even moderate. They did nothing to inspire and mobilize ultra-conservatives, Christian evangelists, and Tea Party acolytes who make up a large and influential number of the GOP’s foot soldiers. When many of them stayed home Election Day, this cost the GOP any real shot they had at beating Obama. This time it may be different.

Trump quickly signed the pledge not to bolt the GOP if he does not get the party nomination. Carson has never given any hint that he’s anything other than a loyal Republican. The Faustian deal is that the GOP regulars will publicly deplore Trump’s immigrant bashes and insults to women. But privately they will wink and nod at them knowing that he, and Carson, stir the anger, xenophobia, bigotry, and even hate, among legions of GOP voters. The 2016 GOP presidential nominee must win the hearts and minds of these voters. That means they must march to the polls in droves in the key battleground states on Election Day.

The man they bank on to make that happen is Obama. He’s the red flag that Trump and Carson will wave high at every turn in the crudest, nastiest, and most vilifying way. As Trump, and now Carson’s surge in the polls show, it’s paying some dividends. Expect more to come.

Earl Ofari Hutchinson is an author and political analyst. He is a frequent MSNBC contributor. He is an associate editor of New America Media. He is a weekly co-host of the Al Sharpton Show on American Urban Radio Network. He is the host of the weekly Hutchinson Report on KTYM 1460 AM Los Angeles and KPFK 90.7 FM Los Angeles and the Pacifica Network.

Brother Earl, the great irony is that Obama is a moderate centrist.  He is very pro Israel. He is a moderate on racial issues at least as far as the Black community is concerned.