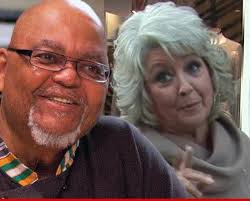 The Hutchinson report has formally invited Deen and Bob Tuschman,  General Manager/Senior Vice President for the Food Network to guest on the show.

“Deen publicly apologized for her past racial slurs and her apology could and should have served as a teaching moment for the nation on race,"  says Hutchinson. “But instead she was penalized for her candor. The Food Network must explain their actions and listeners will weigh in on it as well."

Is that her husband she is pictured with? I am an African and and I think other Africans should stop pretending they are hurt when they mean they may have been insulted--there is a big difference. It is not a good term to use by anyone including other Africans. Many Europeans who have close association with Black people and are familiar with the bad habit by some Black people in using the "N" word toward other Black people forget that this is an inappropriate term to use. It appears she has a loving relationship with the Blackman she is pictured with on this post.

I just added a comment!! Did I waste my time and effort?