Hillary Isn’t Obama, But She Doesn’t Have to Be 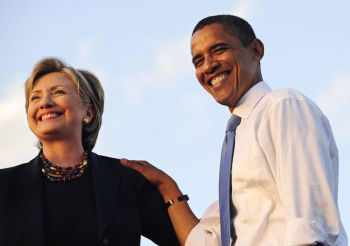 The early voting returns show two unsurprising things. One is that black voters are turning out in smaller numbers in some areas than they did in the 2008 and 2012 presidential elections. The other is that the relatively lighter turnout is in marked contrast to the near record turnout among black voters for candidate Obama in 2008 and President Obama in 2012. Much shouldn’t be made of this for the simple fact that Clinton is not Obama. Clinton doesn’t need to match his total among blacks vote for vote to win the White House. Clinton could never duplicate the euphoria that Obama generated among blacks. His candidacy was not seen as a candidacy, but a crusade, a history making crusade. Blacks did not just see this as a chance to put a black president in office but a chance to snatch a piece of history along the way.

Obama was seen not as a distant, remote, traditional presidential candidate but almost as a family member, someone to embrace and take personal pride in their accomplishments. Many blacks in the past were apathetic, lethargic, and indifferent to the political process because they thought their vote made no difference, or because of their antipathy to the Democrats, whom they accused of plantationism for taking the black vote for granted and giving little in return. But the GOP threw down the gauntlet with its crudely disguised full throated effort to suppress the black vote especially in the must win swing states such as Ohio, Florida and Pennsylvania. This stirred deep anger and resentment among even the wayward black voters at the GOP’s naked suppression ploy and drove even more to the polls for Obama.

Even if none of those pluses and minuses for Clinton were in play, her big political ace in the hole to ensure that she got close to the same overall percentage of the black votes as Obama got in 2012 was Trump. His naked race baiting, polarizing digs, insults, cracks and history of bigotry against blacks quickly materialized in some polls showing him getting zero percent of the black vote. His few showy, media photo op, spectacles at a few handpicked black churches with a thoroughly sanitized audience, fooled no one, and simply added more insult to injury with blacks.

The story wouldn’t have been much different for any other GOP presidential candidate.  In fact, the GOP would always have been one of her greatest strengths and selling points with black voters, as it has been for Democrats the past half century. During this time, every GOP presidential candidate has gotten no more than a marginal percentage of the overall black vote. Its half century of race baiting, racial exclusion, and relentless and brutal assaults on affirmative action, voting rights, civil rights protections, and near eight-year unbroken record of hectoring, harassing, and obstructing every program and Obama has earned it the undying enmity of black voters.

The lip service by the Republican National Committee about making the GOP a more diverse and inclusive party bumps up hard against the brutal political reality that the GOP is rightly regarded as a nesting ground for bigots, extremists, and assorted racial haters. It relies on them to be its back-door shock troops to rally millions of backers in the South and the heartland. Without them the GOP has no chance to make the White House race competitive. GOP presidential contenders have routinely appealed to them, and have had success. It’s that success that has reaffirmed the worst suspicions and fears of black voters, and that’s that the GOP is even more a hopeless captive party of kooks, cranks and unreconstructed bigots.

This would have been the case if a Trump never existed.

The Hail Mary toss of casting more dirt and suspicion on Hillary in her email flap could do nothing to damp down black fury at Trump, let alone have any impact whatsoever among blacks about her candidacy. If anything, it simply confirmed the conspiracy notion that GOP dirty work was at play in trying to do anything at the 11th hour of the campaign to sabotage her run to the White House.

It wouldn’t take Obama, not being the White House candidate, though for blacks to turn out on Election Day in sufficient numbers to give Clinton the edge in the key swing states. Lawsuits were filed in North Carolina, Ohio, and Pennsylvania alleging that the GOP has been up to its usual vote suppression tricks. One of the lawsuits, in North Carolina, was successful. This would help clear some of the barriers to black voting in these states. The ease of early voting in other states would also insure that adequate numbers of black voters cast a ballot.

So, it never mattered whether Clinton could do what Obama did in energizing black voters. All she had to is do what Democrats have done in presidential elections for the last half century, and that’s be seen as a good Democrat. This is more than enough to ensure that the black vote will still be Clinton’s key to the Oval Office.

Earl Ofari Hutchinson is an author and political analyst. He is a weekly co-host of the Al Sharpton Show on Radio-One Network. He is the author of What We Can Expect from President Hillary Clinton (Amazon Kindle). He is an associate editor of New America Media.