Hillary Did Not Lose Because She Was a Lousy Candidate 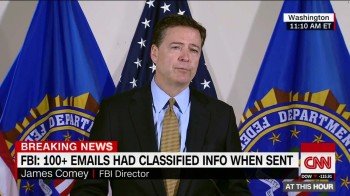 In testimony before the Senate Judiciary Committee, FBI Director James Comey defended going public with his letter on the FBI’s probe into Hillary Clinton’s email server flap at the 11th hour of the presidential election. The question, the answer, and the implication that hung heavy was that Comey’s release of the letter tipped the election to Trump. Clinton has flatly blamed his perfectly timed election eve release of the letter for her loss. Not a whole lot of people agree with her on that. The near universal consensus among pundits, a new book, Shattered, by two Politico writers, that dissects the Clinton campaign’s foibles and missteps, and many on the street, is that Clinton lost because she was a lousy candidate.

They endlessly claim that she didn’t message right, snubbed the white working class, was too arrogant, aloof, and know it all, and smugly believed she had the election in the bag. If she lost it wasn’t because anything Comey did, but because of Clinton.

Let’s be clear. Comey’s letter did wreak colossal damage on Clinton. In the hours before the release, polls showed Clinton with almost a 6-point bulge over Trump. The letter swiftly changed that. Her poll lead plunged to under 3 points. Even factoring in polling margins of error, volatility, bias, and voter deception, that’s still too big a swing in such a short period of time to shrug off as irrelevant. Clinton’s numbers dropped after the Comey letter for two other good reasons. It hardened the belief among big swatches of the public that Clinton was untrustworthy at best, and a serial liar at worse, who might wind up in a court docket. It also endlessly fed the avaricious media search and play up any Clinton scandal in the waning moments before the election’s end.

In this case, timing was everything. Despite his long and loud protestations, Comey had to know that. If not, why then did he keep his mouth shut about the FBI’s probe of Trump’s Russia connection which was ongoing at the same time?

Then there is Trump. There was always a path for a Trump White House win no matter what Clinton said or did. Much was made that there weren’t enough less educated, blue-collar white men in the electorate to push Trump over the top. But that was always misleading. Trump got a lot of votes from middle-class whites, both male and female, college educated, business, and professionals. They had one thing in common and that one thing wasn’t borderline bigotry, loathing of Obama, or dislike and rejection of a Democrat. They still wanted what powered Obama’s 2008 win—change.

Clinton simply was not that change. To them, she was the consummate beltway established, corporate influenced, deal making politician. The Clinton name was the embodiment of that image and dislike. There were two huge tip-offs that Trump was their perfect antidote to that. The first was he held no political office and burnished that fact as a point of pride and as his credential of why he would be different. The other was his muscle aside against seemingly all odds of a dozen rock solid establishment Republican presidential contenders from the race.

Elections are almost always won by candidates with a solid and impassioned core of bloc voters. In Trump’s case, white males, older voters, middle-income, college educated voters vote consistently and faithfully. And they vote in a far greater percentage than Hispanics and blacks, and especially young voters. The only exception was 2008. Obama’s run turned the campaign into a crusade to make racial history. There was absolutely no way that Clinton could ever have recaptured that enthusiasm, passion, energy, and sense of making history that was there for Obama.

Also, Trump was loathed by many from the start, but the Trump haters weren’t going to vote for him anyway. But Clinton was loathed too, and that absolutely nothing to do with anything she said or did on the campaign trail. It had everything to do with a two decade long artful, masterful and relentless smear campaign by the GOP against her. A year before she declared her 2016 candidacy the Republican National Committee was in full torpedo Hillary mode. It was busily churning out anti-Hillary videos, releases, and paid books by party hacks lambasting Clinton on everything from her and Bill’s foundation’s alleged shady dealings to Benghazi.

The notion that Trump was so repugnant and repulsive, and that Clinton would make mincemeat of him in the campaign was also dangerous. It lowered the bar so low in the dirt for Trump that all he had to do was show up on the campaign trail sober and reasonably coherent to score points. The bar for Clinton was stratospheric. She was a woman, a Clinton, and perennially tainted by the GOP’s endless, phony and manufactured scandals against her. It would have taken a miracle to overcome that. There would be none in 2016. And that had nothing to do with anything Clinton did, or didn’t do.