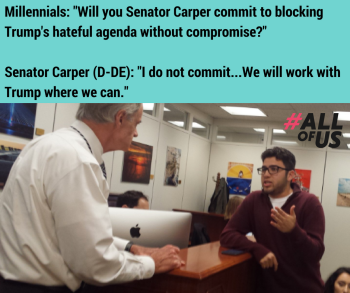 The political doomsday wisdom is that there’s almost nothing the Democrats can do to stop Trump and the GOP from steamrolling any piece of legislation and his cabinet and administration team picks through. The only weapon that Democrats supposedly have to halt or at least slow down Trump say plopping an Antonin Scalia or Clarence Thomas type clone on the Supreme Court is the filibuster. And that’s shaky at best. However, contrary to the conventional wisdom, the Democrats are far from impotent when it comes to fighting Trump. The Senate is one of the world’s most elitist, insular, clubby institutions. To keep it that way, the Senate has a telephone book size set of some of the most convoluted and arcane rules ever devised by any legislative body. The idea is to preserve its exclusive, good ole boy’s status. But buried in those rules are powerful weapons that the Democrats can wield to dither, dodge, duck, and even derail some of Trump’s worst outrages. Here are six of them.

The filibuster. Yes, it’s the most obvious, and popular, and has drawn a lot of attention when used in times past especially by Southerners to try and stop civil rights bills.  It only takes one Senator to keep the debate on a bill going until he or she runs out of verbiage. But that’s only part of how it can be used. The same Senator can propose endless motions or amendments to a bill. The filibuster can be ended by cloture. That’s the magic sixty vote majority rule.

However, even that might not end the matter. Debate on an odious Trump bill or appointee can continue for up to thirty more hours and even this can be extended subject to another three-fifths vote to end it. But even this might not end it. When the bill or confirmation is put to a voice vote, a Senator can challenge the tally and demand that the names of who voted for what be put on paper. It must be granted if it is seconded by one-fifth of the senators present. The idea is to make every senator’s vote visible and open to the public, and thereby accountable; nowhere to hide, in other words

The Hold. A single Senator can block a motion from heading to the Senate floor for a vote simply by telling the Democratic Party leadership that he or she intends to take the action. It can be a secret hold or a public hold.

Unanimous Consent. Most Senate bills don’t go to an actual vote. A bill in more cases than not simply gets passed by unanimous consent after it clears the assigned committee for consideration. However, Democrats can upset the apple cart here by merely objecting to that and that means time, delay, more debate, and an opportunity for much more media and public scrutiny of the odious Trump or GOP sponsored bill.

Closed Session. It doesn’t happen very often. However, when it does the Senate chamber is closed. The public and the media are barred, and so is anyone else not sworn to secrecy. This is usually reserved for sensitive issues such as national security matters, or private communications from the President. Any Senator can call for a closed session. The only thing needed is a second to the motion. This is strictly a tactic to extend a confirmation hearing or discussion of a bill or motion. It buys time, and time with anything Trump proposes is worth its weight in political gold.

30 Hour Debate. This is a weapon that can be used with the supposed unstoppable Trump cabinet picks. Democrats can force a Trump pick to go through 30 hours of debate on his or her qualifications, background, and fitness for the post. It is jarring, acrimonious, and can keep the heat and public attention on the dubious qualifications and nefarious views of the choice.

These are only the most obvious weapons that Democratic senators have in their arsenal to slow down the Trump onslaught. The X factor in all of this is not the tactics the Democrats have at their disposal but the Democrats. The GOP gave Democrats and the nation a six-year template on how to use every Senate ploy to hector, harass, stall, and in many cases, kill proposals former President Obama put on the legislative table. The question is do they have the stomach to do what the GOP did with Obama and use the labyrinth rules of the Senate and Congress to check Trump. The nation’s fate depends on how the Democrats answer that.

Earl Ofari Hutchinson is an author and political analyst. He is the author of The End of Obamacare? and The End of Obamacare 2? Amazon Kindle.  He is an associate editor of New America Media. He is a weekly co-host of the Al Sharpton Show on Radio One. He is the host of the weekly Hutchinson Report on KPFK 90.7 FM Los Angeles and the Pacifica Network.