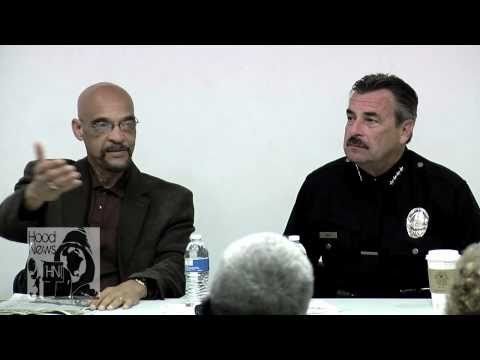 Earl Ofari Hutchinson will discuss The LAPD—How Much Has It  Changed on his weekly Hutchinson Report on KTYM 1460 AM Friday, May 23, 9:00 AM.

Within hours after the report surfaced that veteran LAPD officer Mary O’Callaghan kicked Alesia Thomas in the groin in the back of a police car after her arrest in July, 2012, I, and other civil rights leaders, demanded that charges be brought against O’Callaghan for excessive force. This was hardly a new call. Civil rights leaders have routinely made the same call when LAPD officers are accused of blatant excessive use of force against unarmed suspects.  In nearly all cases, the call for charges has fallen on deaf ears within the Department. But this time it was different, I received a call from LAPD Chief Charlie Beck the instant that the Los Angeles County District Attorney’s office filed felony assault charges against O’Callaghan last October.

But even more revealing, Beck said that he had worked closely with the DA to insure that charges would be brought. This was not a PR gambit or boasting. Beck matter of factly said that there would be no double standard when it came to punishing law breaking within and without the LAPD. This added real action to his words in May 2013, after the Justice Department lifted its consent decree on the LAPD, "The consent decree has made this a department I am proud to hand over to my children. It has been a catalyst for incredible change in my police department."  The Department ticked off more than 100 reforms the LAPD had made during the years the decree was in force.

Beck played a crucial part in insuring that those reforms were implemented and enforced. This was in sharp contrast to the LAPD of two decades ago. The LAPD got most of the finger-point for triggering the L.A. riots in 1992 through its brutal, abusive, and racist policies, capped by the videotaped beating of black motorist Rodney King.

In the next decade, there would be much hand-wringing and soul-searching over how to reform the LAPD, complete with investigations, commissions, voluminous reports, city charter changes, a federal consent decree, and the appointment of two reform-minded chiefs. The aim of all of this was to transform the LAPD from the nation's poster-agency police department for out of control abuse, violence, and bigotry to a clean, efficient, community-oriented police department. It was more than a case of image makeover. It was a desperate need for a profound course correction in the way the LAPD did business.

The changes were soon visible. Successive LAPD chiefs disciplined, suspended and fired officers for misconduct. The use of force by officers dropped. Citizen complaints leveled off. LAPD officials became constant presences at community events, meetings and forums, always pushing partnership and dialogue with the community leaders. There were aggressive policy changes by the Los Angeles Police Commission, the civilian oversight agency, and the LAPD Inspector-General. None of these things would have had the remotest chance of happening a decade earlier. Though LAPD top brass continued to loudly protest that racial profiling didn't exist despite legions of racially based complaints against the department, there was still the sense that the LAPD had turned the corner. Polls showed that more blacks than ever expressed guarded support for the LAPD.

Yet while the LAPD has clearly continued the reform process during Beck’s tenure, there are still some of the old troubling signs that much more needs to be done, especially when it comes to the most volatile issue -- and that's the use of deadly force. The killing of a young unarmed black man, Reginald Doucet, in 2011, the Wild West-style massive shootout at a suspect after a chase (90 bullets) in early April 2012, and the revelation that an officer racially profiled Latino motorists are among those signs. The racial profiling case raised the obvious question if one officer was caught profiling, how many officers may be doing the same. This is the question that still dangles.

Then there is the discipline issue. Beck did raise troubling questions of favoritism and turning a blind eye to an officer who expressed racial bigotry with his overturn of a Board of Rights decision to fire the officer that used racial slurs in an off duty bar room confrontation with a black patron. The Los Angeles Police Commission which has civilian oversight over the department must and should continue to hold the chief accountable for these questionable decisions. However, lost in the furor over Beck’s decision was that he slapped a 65 day suspension on the officer, required intensive retraining, and has agreed to the Board’s decision to fire dozens of other officers for questionable conduct.

Officers who overuse deadly force or commit acts of misconduct must be punished. Without it, it reinforces the notion that officers can administer street corner justice. This is the practice that got the LAPD into so much hot water in years past.

Still, this is not to say that the LAPD is in any danger of slipping back into the practices of its bad old days. Chief Beck has made it abundantly clear that that won’t happen. The call I got from him about O’Callaghan proved that. For that and much more he deserves another five years as chief.

Earl Ofari Hutchinson will discuss The LAPD—How Much Has It  Changed on his weekly Hutchinson Report on KTYM 1460 AM Friday, May 23, 9:00 AM. Hutchinson is an author and political analyst. He is a weekly co-host of the Al Sharpton Show on American Urban Radio Network.