What We Can Expect from President Hillary Clinton 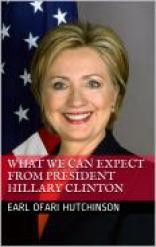 The race for White House is effectively over. Hillary Clinton will be the 45th president of the U.S. The question now is what can Americans expect from a Clinton White House.  She has laid out pages after page of policy wonk positions on civil and women’s rights, civil liberties, taxes, jobs, the economy, health care, education, military preparedness, combatting terrorism, on her campaign website. Most of them are the almost obligatory positions that Democratic presidential candidates have taken on the big-ticket issues.

However, it’s one thing to spell out an agenda on paper and another to get any of it through. She’ll almost certainly kick things off by trying to make good on the pledge that she made in a speech at a Michigan auto and aircraft parts manufacturing plant near Detroit in August, 2016. She promised a big spending plan to the tune of nearly $300 billion on a vast array of infrastructure building and repair projects; roads, bridges, airports schools, sewer systems and so on. The projects would create new jobs for thousands.

Clinton made it clear that she expects the rich to foot much of the bill by demanding hefty tax hikes on them. She added the final FDR touch to her big spending plan by promising to plop the legislation on Congress’ table within her first 100 days in office.

Clinton knows full well the perils ahead. The biggest threat is the Congress that she’ll have to go to with her big spending package. A GOP-controlled Congress will be as hostile to her big budget and tax increases as it was to Obama’s.

With a big White House win, Clinton is on far more solid ground when she tries to follow through with the pledge. This will give her the breathing space needed to get parts of her jobs, education, health care, and infrastructure overhaul programs through.

A Democratic take back of the Senate is absolutely a must be when it comes to the Supreme Court. Arizona Senator John McCain has openly saber rattled for the GOP to block any Clinton high court pick. Clinton almost certainly will have the chance to pick one, two, or even three, more justices to the bench. The judges she will choose will be in the mold of Ruth Bader Ginsberg, Stephen Breyer, and Sonia Sotomayor. They will not be radical ideologues of the left. They will be judges with long standing court experience, solid legal credentials, and the highest ratings from the ABA and other legal groups. They will deliver safe and predictable votes on everything from women’s and civil rights to stemming environmental abuses.

Clinton can’t and won’t try to avoid the problem that has been perennially the single biggest tormenting lightening rod for black-white discord, namely, wanton police violence against blacks and minorities, and the astronomical numbers of blacks in America’s jails and prisons.

Her Oval Office to-do list is a mix of old and new proposals on police and criminal justice reform. They will meet with a wall of intense opposition, stonewalling or disregard by conservative Democrats and GOP state legislators, and congresspersons, police and prison unions, victim rights groups. To get one or more of her justice initiatives through Congress she’ll need a lot of help from Democrats within and without Capitol Hill. She’ll get lots of help here from civil rights groups, and criminal justice reformers.

Clinton’s policies on foreign affairs, military security, the fight against terrorism and checking Iran’s nuclear ambition, will be more muscular than Obama’s. She won’t send in troops to Syria. But she’ll be tough on sanctions, and enforcing a no-fly zone there. She will do back with weapons and logistical support any faction that purports to be any kind of real alternative, with a pronounced tilt toward the U.S., to ISIS and the Assad regime. She’ll rigorously monitor Iran’s compliance with the nuclear deal, cut not a penny from US military financial backing to Israel, while making the obligatory nod on paper to a Palestinian state. She will take the hardest of hard lines on Russia’s saber rattle in Eastern Europe and other hot spots. But this is still a far cry from a big ramp up in the US military presence in Iraq or Afghanistan as Obama did.

President Clinton will be pulled and tugged at by corporate and defense industry lobbyists, the oil and nuclear power industry, government regulators, conservative family values groups, conservative GOP senators and house members, foreign diplomats and leaders, and in turn LGBT, women, civil rights and liberties, and environmental watchdog groups. They all have their priorities and agendas and all will vie to get White House support for their pet legislation, or to kill or cripple legislation that threatens their interests.

Clinton’s entire political history if anything has shown that she will keep a firm, cautious and conciliatory eye on American public opinion when it comes to her making policy decisions and determining priorities. That’s what presidents, all presidents must do, and President Clinton will be no different.

Earl Ofari Hutchinson is an author and political analyst. He is the author of What We Can Expect from President Hillary Clinton (Amazon Kindle) He is an associate editor of New America Media. He is a weekly co-host of the Al Sharpton Show on Radio One. He is the host of the weekly Hutchinson Report on KPFK 90.7 FM Los Angeles and the Pacifica Network.