What Trump and Clinton Must Do to Win the Debates 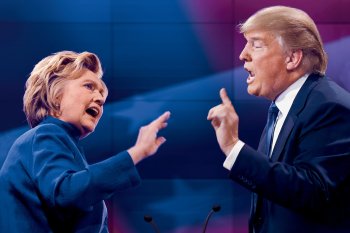 There’s been a fierce debate about presidential debates. The debate is whether they really do make or break a presidential candidate. This start it all over again in the run-up to the three scheduled debates between GOP presidential candidate Donald Trump and Democratic Presidential candidate Hillary Clinton. The hard political reality is that unless a candidate makes a whopper of a misstatement, looks blurry and bleary on stage, or is simply flat-footed, and grossly unprepared with their answers, they don’t mean much in deciding who ultimately bags the White House. Most voters cling to their party affiliations, political beliefs, and personal likes and dislikes of candidates no matter what the candidates say on the issues. The mass of voters just aren’t swayed by a candidate’s verbosity, good looks, or seeming erudition on the issues.

However, this go around the debates do have real significance because Trump and Clinton have a lot to prove to a lot of voters who don’t like either one of them, and are deeply uneasy about the prospect of either one of them in the White House. Trump’s high mountain to scale starts with Trump. He’s loathed by millions as little short of a stupendously unqualified, carnival barker, pitchman who parlayed wild and deliberately inflammatory birtherism, racist, immigrant, Muslim and Obama bashing into the top GOP spot. The added knock is that he got where he did in great part because of a slavish media that at times has acted as his unofficial PR team in shoving him down the public’s throats. His job is to try too undue, soften, or instill collective amnesia about his dubious history and ploys to get attention. His management team has already given a big hint at how he’ll try to pull off this Houdini trick.

He palavered with the Mexican President. He went to two black churches. He went to Flint, Michigan. He talked about jobs and police abuse both places. He pithily back pedaled from birtherism vis-à-vis Obama. He laid out a detailed policy position on child care, promised to lay out even more detailed positions on tax reform, foreign policy, health care, and social security. He’s trying mightily to take off the table that he’s little more than a Klansman in a suit, has a zero policy program, less than zero ability to govern, and is totally incapable of being anything other than an arrogant, know it all blowhard.

The charm image he’ll try to project is Trump the reasoned, thoughtful, stick to the script, disciplined, play by the established political rules, candidate with the right temperament to work with Democrats, make sound political decisions, and show cool judgment on the thorny and at times crisis issues that confront all presidents. It’s a tall order. But in the debates and everything surrounding them, Trump must convince the independent conservative and moderates in the handful of swing states that will decide the White House and who don’t think much of Clinton, but just can’t bring themselves to pull the lever for a guy who they see as an overt racist, and an egomaniacal political neophyte that he is neither one.

Clinton has a high mountain to scale too. It also starts with Clinton. In the early going, the election seemed almost a forgone conclusion for an easy Clinton win given the trainload of baggage Trump dumped on the political platform. But the continued pulverizing of her over the emails, the foundation doings, and now health questions all of sudden have turned a seeming rout into a real dogfight. Clinton’s bigger problem is the nagging perception that polls shows up and that is that millions see her as everything from a congenital liar to a crook. The most charitable in all of this negative voter perception of Clinton is that she’s untrustworthy. Clinton must undue, offset, or instill collective amnesia about these negatives.

She must play hard on her strengths, dependability, experience, and a cast iron grasp of the big ticket policy issues from the economy to foreign policy. She must tie herself to the Obama positives where needed and project a people friendly, no academic think tank policy wonk, plain English, demeanor when answering debate questions. When the inevitable questions come up about the emails and the foundation and her health, she’ll have to act and show physical vigor, look directly into the cameras, admit that she made mistakes with the emails, learned from the mistakes, and it will never happen again. And, while the foundation has done phenomenal work and improved conditions for legions globally, say that she’ll be completely out of the Clinton Foundation business, and that includes Bill and Chelsea too.

There’s little margin of error for Trump and Clinton in the debates. Both have a lot of hard work to do to try to turn their mountain high pile of negatives into some semblance of positives. Millions will be watching to see if they can do that. This time the debates really do mean something.

Earl Ofari Hutchinson is an author and political analyst. He is the author of How “President” Trump will Govern, (Amazon Kindle) He is an associate editor of New America Media. He is a weekly co-host of the Al Sharpton Show on Radio One. He is the host of the weekly Hutchinson Report on KPFK 90.7 FM Los Angeles and the Pacifica Network.