The RNC’s Losing Battle Against its Racists 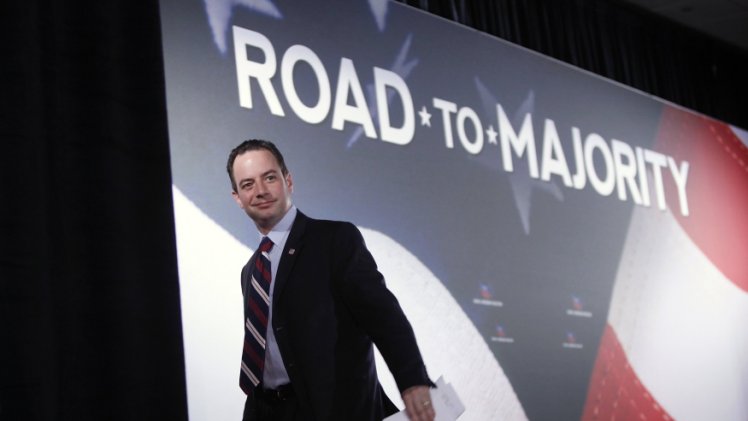 Republican National Committee chairman Reince Priebus sounded like he really meant business when he frontally assailed racism from one of the GOP party faithful. He lambasted GOP Iowa congressman Steve King for his silly, vicious and relentless trash of immigration reform and undocumented immigrants. Priebus used the “R” word, racism, to describe King’s rants and sounded even more indignant by calling his attacks “horrific” to boot.

By GOP standards, Priebus has been on somewhat of a public crusade to speak out and even take quiet action on the racist antics of some party officials. A few weeks back he urged and got the ouster of an Illinois Republican county official for the vile attack on Erika Harold, an African-American, and GOP Illinois congressional candidate. Priebus called the verbal bash of Harold “inexcusable” and vowed that that kind of behavior would not be tolerated.

This is Priebus and the RNC’s effort to bolster its public vow some months back to recast the GOP as a party that welcomes minorities. The 100 page manifesto that Priebus rammed through in March presumably pledged to back immigration reform, aggressively ramp up efforts to woo blacks, Latinos, Asians, and gays, and spend millions on a national campaign to convince minorities that the party really does care about them and, of course, wants their votes. The key though is persuading Hispanics that the RNC speaks for a majority of Republicans when it claims to back comprehensive immigration reform and that it will loudly condemn naked, old fashioned immigrant bashing by party officials or regulars, thus the outburst against King.

Priebus could save his breath. A few choice and timely words against a loose cannon congressman, and a wayward local GOP official, are not even the proverbial finger in the dike against the steady torrent of racial baiting that routinely pours from the lips and actions of legions of GOP rank and filers, whether their target is President Obama. Or Priebus’s thinly disguised campaign to stop Hillary Clinton by saber rattling the networks to dump their Clinton on air projects. But even that almost paled beside Priebus’s declaration on the Christian Broadcast Network in July that he didn’t much like the word diversity personally and that the RNC would stay the course in representing “christian” beliefs. This was a wink and nod assurance to those Republicans having nervous fits about his diversity manifesto.

The other problem with Priebus’s minority outreach public relations charade is that even if he really meant to crack down on his party bigots he couldn’t.  There are millions of GOP backers in the South and Heartland, and the gaggle of right-wing webs, blogs, and talk radio jocks that think the GOP's only flub is that it's not truly conservative enough. They have hammered the GOP that any retreat from its core beliefs and message will perpetually doom it to political extinction in national politics. They warn that if the GOP suddenly started pandering to minorities and gays it could kiss millions of their fervent supporter's goodbye. Indeed many who didn't think Republican presidential contenders John McCain and Mitt Romney were authentically conservative enough for their tastes did stay home in 2008 and to an extent in 2012. It was evident even in the backwash of the 2012 defeat, when a parade of GOP hardliners jumped all over Romney and wailed that he and GOP candidates lost because they weren't conservative enough, or their self-inflicted gaffe wounds did them in. They denounced and sloughed off any talk from the GOP party leaders of re-messaging, mounting an aggressive outreach to minorities, even Hispanics, and do a reversal on immigration, and they won't let up on that.

The demonstrations that dogged Obama in Orlando, Phoenix, and the loud cheers from hundreds at the Missouri state fair for a rodeo clown that mocked Obama and wished him harm was not just simply the tortured and sad outbursts from a few kooks, cranks, and misfits. It is the open sore that represents the ugly rot of racism that courses through the party’s base, which if anything, has gotten even more uneasy, angry, and frustrated, with every passing day of the Obama administration, and now with the looming prospect of a Clinton presidential bid with no credible GOP candidate to make it a contest against her.

In the end, it’s always action not rhetoric that telsl whether a party leader really means what he or she says about making change. From time to time, Priebus will feign outrage at the idiotic ravings that comes out of a GOP mouth. That’s his job. But many millions still back the GOP precisely because they like the party just the way it’s always been and shudder at the thought that it could change. That’s more than enough to guarantee that Priebus will fight a losing battle against his party’s racists.

Earl Ofari Hutchinson is an author and political analyst. He is a frequent MSNBC contributor. He is an associate editor of New America Media. He is a weekly co-host of the Al Sharpton Show on American Urban Radio Network. He is the host of the weekly Hutchinson Report on KTYM 1460 AM Radio Los Angeles and KPFK-Radio and the Pacifica Network.