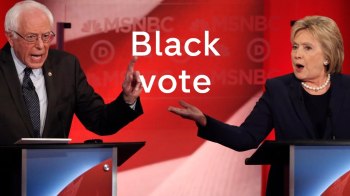 Based on Democratic Percentage Rate

Clinton received 84 percent of the Black vote in South Carolina and 90 percent in Mississippi.

If Clinton had received the same percentage of the Black vote in Michigan that she received in South Carolina or Mississippi she would have received 22,400 to 28,000 more black votes in the Michigan Democratic Primary.

That margin would have provided the winning margin for Clinton. She, not Sanders, would have won the Michigan Democratic Primary.

Crunching the numbers is more than an academic Poli Sci 101 exercise. With major upcoming primaries in the big delegate (and electoral rich) rich Northern states California, New York, Pennsylvania, Illinois, and Ohio, though Black voters are a decided minority of the overall vote total even a slight percentage of the Black vote total for Sanders and a downtick for Clinton can make or break either one in the primaries and beyond. Campaign 2016 is truly a sheer political life and death numbers game for both.