The Issue for the Supreme Court is Not Obamacare, But Obama 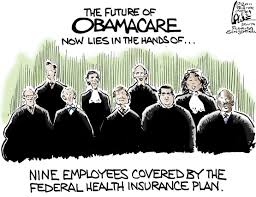 U.S. Supreme Court Chief Justice John Roberts was lambasted as a turncoat, traitor, and betrayer by conservatives when he cast the deciding fifth vote in 2012 upholding the constitutional soundness of the Affordable Care Act. This allowed states and the federal government to put in an array of measures to fully implement the act. That didn’t end the matter. Conservatives dug deep and found a provision buried deep in the law that purports that only states and not the federal government can set up exchanges, and thus subsidies in the form of IRS approved tax credits, to the millions that sign up for coverage. It plopped king vs. burwell, big on the court docket. The case is more, much more, than just yet another of the never ending challenges to the Act. It’s yet another frontal politically loaded challenge to President Obama. Agai the GOP and conservatives, bank on the its four trump cards, Thomas, scalis, Alioto, and yes Roberts on the court bench to deliver the wallop to the law.

This time they may get their wish with Roberts. Despite his momentary defection in upholding the law to years ago, Roberts and the other three have turned the number 5 to 4 into a fine art. That's their reflexive vote against any and every Obama administration position, initiative, or piece of legislation that's challenged and that winds up before the court.

In the Hobby Lobby ruling they and Anthony Kennedy ruled that privately-held corporations can refuse on religious grounds to cover the cost of contraceptives for its employees was typical. It was a blow to the Act. The ruling, though, was the standard template for Robert and the others war on Obama. They, and Kennedy, have ruled more than a dozen times that Obama has allegedly badly abused his constitutional authority in decisions, appointments, and court appeals. They undergirded the GOP's relentless gripe that Obama is a serial constitutional usurper.

Roberts and the other conservatives a majority of times have ruled against Obama administration position in the big ticket issues of voting rights, affirmative action, corporate and property rights, and union and environmental protections.

Their assault has had little to do with the law, and everything to do with politics and ideology. Their decisions put bluntly against him are blatant partisan political pandering. Roberts and the other three justices were appointed by Republican presidents. The other four justices that almost always back the Obama administration in their votes on court cases were appointed by him or other Democratic presidents.

On the presidential campaign trail in 2000, George W. Bush was asked if elected what kind of judge he'd look for and nominate. He didn't hesitate. He pledged to appoint "strict constructionists" to the court and specifically named Thomas, Antonin Scalia and William Rehnquist as the judges that perfectly fit that description. By then the three had already carved out a hard line niche as three of the most reflexive, knee jerk, reactionary jurists to grace the court in decades. The King versus Burwell case, the ultra-conservative American Enterprise Institute and the litigious Competitive Enterprise Institute which is running the point on the case banks on two things to get the court to gut the Act. One is the inherent partisan political bias of Roberts and the other three judges. And the other is that they will adhere unbending to the narrow of narrowest strict constructionist reading of the law. And hold that the four words "established by the states" which is in the wording of the Act and makes no mention of the federal government establishing buyer exchanges complete with subsidies to strike down the federally established exchanges. The Obama administration correctly argues that the court should follow the plain sense text of the law and prior precedents which clearly permits tax credits to individuals whether the exchanges are state established or established by the federal government.

If the judges, joined by Kennedy, indeed act according to the expected script, it will be another notch in the GOP hit plan on Obamacare But beyond that it will stand as yet another in the long train of crude and cynical political ploys to inflame millions of Americans and stoke hostility to Obama and the Democrats.  This would sharpen the already considerable political edge it got when it grabbed the Senate and tightened its grip on the House in the 2014 midterm elections. That edge it hopes will give it even more momentum in the run-u to the 206 presidential elections.

The big loser as always will be the millions in the 34 states where the government established the exchangs who potentially could lose their coverage in the states with federally established exchanges. But that’s of little importance to the GOP and their reliable four justices who have waged ruthless war against Obama. The issue for both in this case is not Obamcare, but Obama.

Earl Ofari Hutchinson is an author and political analyst. He is a weekly co-host of the Al Sharpton Show on American Urban Radio Network. His forthcoming book is: From King to Obama: Witness to a Turbulent History (Middle Passage Press) http://www.amazon.com/dp/0692370714

He is a weekly co-host of the Al Sharpton Show on American Urban Radio Network. He is an associate editor of New America Media. He is host of the weekly Hutchinson Report Newsmaker Hour heard weekly on the nationally network broadcast Hutchinson Newsmaker Network.

When are the people of this country going to realize that Republican and Democratic government does not work anymore. The two parties spend all of their time taking pot shots at one another and nothing gets done. The one who suffer are all of us. It is really sad how our country deteriorates as Republicans ignore our rights by hogtying the hands of our government. Even if they are not corrupt when they enter the political arena, they are corrupt shortly after they learn from other Republicans how to play the game. We desperately need term limits on both congress and the senate to fix this mess.

Term limits is not going to solve the problem.  The electorate will continue to vote for the same type of ideologue.  And Earl, it is "state", not "states", in the ACA.