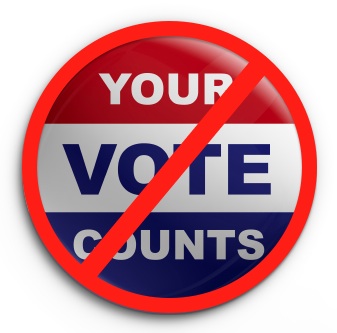 The GOP’s relentless war on alleged rampant voter fraud targets, not thousands, as many critics have noted, but millions of eligible voters. To no surprise, the Brennan Center for Justice found that the majority of the five million eligible voters that could be banned from the polls under the new restrictive laws rammed into place in a dozen states by GOP governors and GOP controlled state legislatures were black, Latino, or American Indian, low income, and young. In 2008, these voters provided the decisive margin for President Obama’s White House victory in Ohio, Pennsylvania, North Carolina, Florida, Virginia, and Colorado. In 2000 and 2004, Bush won five of these six states. In every case, he needed a solid turnout from older, white, conservative, overwhelmingly male voters to win.

That changed radically in 2008 with Obama’s win. GOP strategists were determined that there would be no repeat of this in 2012 and unleashed their voter suppression campaign. But Attorney General Eric Holder counter-attacked with Justice Department lawsuits, court actions, and injunctions to try to halt the GOP effort to suppress the vote. Holder’s fight back against the GOP’s ham fisted efforts to shoo as many poor, minority and young voters away from the polls in November and beyond almost certainly is a major reason for the GOP’s furious political mauling of him.

For the GOP, its voter suppression smokescreen is about numbers; two numbers to be exact. One number is the popular vote. Democratic presidential candidate Al Gore got a bigger share of the popular vote than Bush in 2000. He got that because of the heavy turnout in key states of the GOP’s prime vote suppression targets, blacks, Latinos, and the young voters. In a super tight 2012 race, the five million voters that the Brennan Center documented as potential victims of the GOP’s disenfranchising rash of voter ID and registration laws, vote could tip the popular vote to GOP presidential contender Mitt Romney. The five million vote estimate, in fact, may be even an undercount, since some estimates put the number at more than 20 million possible eligible voters that could be affected if the torrent of new GOP driven requirements is fully enforced.

But as Gore’s popular vote win showed, a popular vote majority is meaningless without securing the 270 electoral votes needed to win the presidency. This is the second number the GOP’s voter suppression campaign aims to attain.  The states that have clamped on the new voter restrictions will provide 171 electoral votes in November.  That’s more than sixty percent of the total needed for a presidential candidate to bag the White House. The one crucial state that Obama did wrest from the GOP in 2008, Pennsylvania, has been a special target of the GOP’s suppression war.  If the state’s new stricter, voter ID law had been in place in 2008, the margin of Obama’s victory in the state would have been much smaller, if at all.

The GOP claims that its only concern is to insure clean and fair elections, nabbing vote fraud lawbreakers, and upholding constitutional precepts of rampant voter fraud. These are phony, self-serving fraudulent excuses. The rabidly partisan Republican National Lawyers Assn.’s report in 2010 found a grand total of 400 election fraud prosecutions over a decade nationally.  That’s less than one per year per state. The underwhelming instance of fraud uncovered in Florida, which has drawn much public attention, is no aberration. Studies that examined alleged voter fraud in Ohio and Wisconsin in the 2002 and 2004 elections found only a handful of actual cases of voter fraud. More than nine million votes were cast in the two states in both elections.

GOP officials have not totally scrapped the old tried and true methods of voter suppression. They include: district gerrymandering, tightening felon bans, skimping on the number of polling places and machines in mostly black and Latino neighborhoods, stationing police at the polls, and challenging citizenship papers where they can get away with it. There is even some GOP congressional talk about attempting to scrap 1965 Voting Rights Act entirely or reduce it to a toothless measure long before its 25-year renewal expiration date in 2032.

Holder has made his most dogged challenge to the GOP voter suppression campaign in Texas which has enacted a rigid voter ID law. He bluntly called it a new poll tax, which is the racist weapon Southern states used for decades to keep blacks from the polls. As Holder knows, it took decades of protests, marches, litigation and a Supreme Court decision to finally dump the poll tax. The GOP is banking that its new voter suppression tactics will also hold up for years and through many elections to come, starting most importantly with the 2012 presidential election. The GOP’s war on phantom voter fraud has only one aim and that’s to grab the White House and much more by hook or crook.

Earl Ofari Hutchinson is an author and political analyst and MSNBC Commentator. He is a weekly co-host of the Al Sharpton Show on American Urban Radio Network. He is the author of How Obama Governed: The Year of Crisis and Challenge. He is an associate editor of New America Media. He is host of the weekly Hutchinson Report on KPFK's Pacifica Radio Los Angeles streamed on kpfk.org

We need to support Eric Holder's bold stand against this fraudulent disenfranchisement.  Our failure will cost the White House and much more. IT'S ABOUT THE VOTE, STUPID!!!