Can the GOP Pry some blacks away from President Obama? 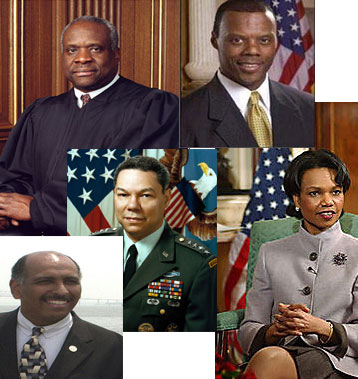 A black Republican advocacy group wasted no time in hitting the airwaves moments after GOP presidential contender Mitt Romney addressed the NAACP convention. The group touted Romney’s alleged triumph in getting more than a few of the hostile crowd to cheer him at times. Their national radio ad taunted Obama like this:

Narrator:   Then he said:

Narrator:   That’s what Obama said Democrats do to poor blacks.

Narrator:   You voted with your heart.

Narrator:   Now vote with your head.

The ad hit hard at Obama on the point that Romney, GOP strategists, and their black GOP point persons are convinced is the issue that can touch a sensitive nerve among blacks. That’s jobs and poverty. The GOP sniffs a potentially perfect political storm with it; a stagnant economy, the chronically double digit black joblessness, and the Obama administration’s non-explicit emphasis on the crisis. That was capped by Romney’s appearance at the NAACP convention, and Obama’s non-appearance there. Despite the hit ad and Romney’s crowing to an interviewer that there were many, unnamed of course, blacks that supposedly told him after his convention speech  privately that they agreed with him, neither Romney, GOP strategists and black Republicans in their wildest fantasy believe that they will make even a modest dent in Obama’s black support.

But they do cannily crunch the numbers and bank that even a small drop-off in the percentage and number of black votes in the traditional must win states of Pennsylvania, Ohio, Florida, North Carolina and Virginia that Obama won in 2008 could spell potential disaster for him. A cursory look at the numbers indeed signals potential danger.  Obama got over 65 million votes in 2008. GOP presidential rival John McCain got over 57 million. Of the roughly 15 million eligible black voters, nearly 8 million voted for Obama. That was a surge of 2 million more black votes than in 2004. The surge was attributed exclusively to the fire and passion blacks had to elect the first black president. Obama overall got nearly 95 percent of the black vote. These nearly 8 million votes provided nearly the full total of Obama’s winning margin over McCain in the popular vote column.

Now fast forward to 2012. A drop-off of even one to five percentage points in the total black vote would still put the president’s percentage total at the off chart number of ninety percent of the black vote, but it would hurt him. This would put his raw number total loss at potentially several hundred thousand votes. This is not as inconsequential as it first seems, particularly given that the African-American votes are not scattered geographically in all states but heavily concentrated in the urban areas in the crucial Midwest and Southern swing states.  In several of the states, Obama’s winning margin over McCain was in the low single digits. While Latino and young voters will again overwhelmingly back Obama, percentage wise, there’s no certainty that the fire and passion they showed for his campaign in 2008 is still there in 2012. Polls show that Obama decisively won the battle for centrist independents in 2008. But this year their votes are badly fractured, with even less guarantee that they will again give him major support. This could mean a significant fall-off in their numbers as well. That makes a massive and impassioned turn-out by black voters even more imperative for him. The GOP will do everything it can to make sure that doesn’t happen.

Romney will take every opportunity to shove the notion down the throats of black voters that Obama’s alleged failures on the economy have directly resulted in mounting economic misery in poor black communities. The appeal will be to them not too necessarily embrace Romney, but simply for them to pause and consider their misery. The shrewd gambit is to create enough doubt, hesitation, and dismay among blacks, and then hope that that’s enough to stem some of the black voter floodtide to Obama.

Obama walks a narrow tight rope. He must do everything possible to keep the significant number of wavering and even bigoted white Democrats who are indifferent or outright hostile toward him from jumping ship, and not voting, or worse crossing over. This means moving gingerly on the issue of race. But at the same time he must stoke the enthusiasm level of black voters by sending constant signals that he is not taking their vote for granted, and remind them that his policies on health care, job stimulus and small business have benefited blacks. And that if elected he’ll do even more to battle chronic high unemployment, failing public schools, high incarceration rates, home foreclosures, and poverty facing black communities.

It’s a tall order. But one that must he must fill to insure that the GOP fails miserably in its ploy to pry some blacks away from him.