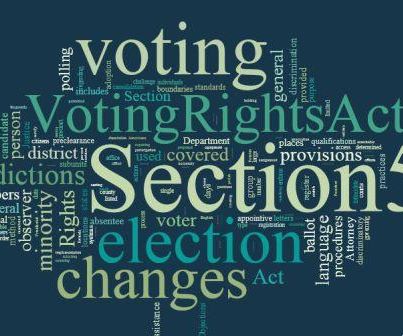 One of the GOP’s fondest wishes has been to kill the landmark 1965 Voting Rights Act. Twice it floated several trial balloons in Congress. The first one was in 1981 when the Act came up for renewal. The deal in the initial passage of the Act was that it be renewed every 25 years.  A few hardline ultraconservatives in the administration of then President Reagan administration made some loud threats to push Reagan to oppose its renewal. They were just that, idle threats. Reagan with no fanfare signed the renewal legislation. However, the threats were a forewarning of things to come. When the Act came up for renewal again in 2006, the threats to thwart the law, turned into a mini-movement in Congress to delay or even block passage. A pack of House Republicans stalled the legislation for more than a week and demanded that hearings be held.

They used the same old argument that it punishes the South for past voting-discrimination sins, and they didn't like the idea of bilingual ballots. Bush signed the renewal order.  But the GOP had served notice that the early saber rattle against the act was a just a warm-up for a full throttle frontal assault. The GOP pecked at eroding the Act with the rash of photo identifications laws that the GOP governors and GOP controlled state legislatures enacted in recent years. The aim was to discourage and damp down the number of minority and poor voters that overwhelmingly vote Democratic.  It backfired. Black and Hispanic voters thumbed their noses at the GOP vote suppression ploys and packed the voting booths again in mass numbers in 2012.

The 2012 presidential election result was the final tipping point for the GOP. Though, it maintained its tight grip on the five Deep South states, and other Old Confederacy states, almost exclusively with the majority votes of white conservatives, the increased number of black and Hispanics in the states, poses a mortal threat to continued GOP dominance in those states, that is if there are no barriers propped up to their registering and voting.

The GOP’s hoped for trump card to stave that off as long as possible is the Supreme Court. The conservatives on the court read the election tea leafs and three days after President Obama’s reelection announced that they would take up a challenge to the Act. They dropped strong hints that they may well vote to gut the Act.  Justice Anthony Kennedy said he was troubled by the provisions.  Chief Justice John Roberts bluntly said that things have changed in the South and that blacks supposedly vote everywhere in the South without any barriers or prohibitions. Clarence Thomas, to no surprise, went even further and flatly called Section 5 of the Act unconstitutional and left no doubt if and when he had the chance he’d knock the Act out completely.

The hook is the federal lawsuit by Shelby County, Alabama that claims the Act is outdated, discriminatory, and a blatant federal intrusion into state’s rights. The lawsuit explicitly wants the centerpiece of the Act, Section 5 dumped. This is the provision that mandates that states get “preclearance” from the Justice Department before making any changes in voting procedures.  State attorneys general in several states have endorsed the Alabama County’s challenge.

The claims that the Act is a waste since blacks and Hispanics vote whenever and wherever they please is nonsense Even though black and Hispanic voters did vote in big numbers in the 2012 election, in many districts they still had to stand in endless lines, have their IDs thoroughly scrutinized, had no bilingual ballots, found voting hours shortened, and had to file legal challenges in state and federal courts to get injunctions to stop the more onerous of the voter suppression laws from being enforced.

This was only part of the story of the roadblocks the GOP has thrown up. A study by the Alliance for Justice, a Washington DC based, public interest group, documented legions of complaints and challenges filed by the Justice Department and voting rights groups to discriminatory changes that county registrars have made to eliminate or narrow down the number of voters in predominantly minority districts.

There was never any real threat that Congress would have dared done away with the Act despite the GOP’s harsh warnings and wishes. But the action of many state officials, attorneys general and now the Supreme Court that threaten the Act is a grave warning that the GOP may finally get its fond wish. And that’s to gut, if not outright end the Voting Rights Act.

Earl Ofari Hutchinson is an author and political analyst. He is a weekly co-host of the Al Sharpton Show on American Urban Radio Network. He is the author of How Obama Governed: The Year of Crisis and Challenge. He is an associate editor of New America Media. He is host of the weekly Hutchinson Report Newsmaker Hour heard weekly on the nationally network broadcast Hutchinson Newsmaker Network.

Comment by Suzanne Artemieff on February 21, 2013 at 4:46pm
So here's what I'm wondering: maybe that would be a good thing because it could open up the possibility for comprehensive legislation to protect voting rights in all states, which is currently needed in blue and swing states controlled by Republicans, e.g., PA and OH. We really need an updated piece of legislation to protect against the most recent attempts to disenfranchise people of color, youth, seniors...

So Suzanne, tell me why you think such legislation would emerge from the current Republican-controlled House of Representatives.