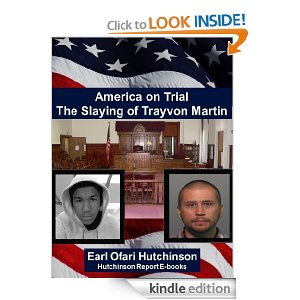 Author and Nationally Syndicated Columnist Earl Ofari Hutchinson’s new book,  America on Trial: The Slaying of Trayvon Martin (Amazon Kindle) examines the issues of race and the criminal justice system in the Martin case. Hutchinson contends that the defense strategy to put Trayvon Martin not George Zimmerman on trial has been used successfully in the past. Defense attorneys in highly charged racial cases where the victims have been young African-Americans have time and again turned the tables and painted the victims as the culprits.
Hutchinson notes that defense attorneys used this tact in the Rodney King beating case in Los Angeles, the Sean Bell police killing in New York, and the killing by a transit police officer of Oscar Grant in Oakland.

Hutchinson says that prosecutors have a daunting job trying to overcome the negative racial stereotypes. Two Penn State University studies on racial perceptions and stereotypes, one in 2003 and a follow-up study in 2008, found that many citizens are likely to associate pictures of blacks with violent crimes, and in some cases where crimes were not committed by blacks they misidentified the perpetrator as an African American. Defense attorneys always play hard on any prior misconduct, bad behavior, or any criminal conduct by the victim.

Zimmerman’s attorneys, Hutchinson adds, have relentlessly played on this theme about Martin.  This feeds into the stereotype of bad behaving blacks, and that the victim somehow was responsible for the accused using deadly force.