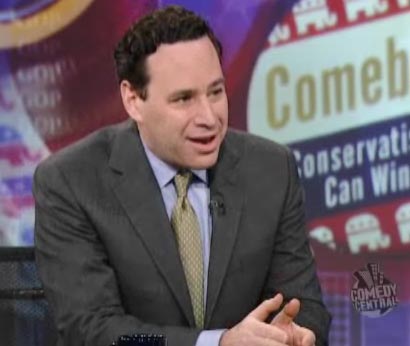 In an exclusive interview on The Hutchinson Report Newsmaker Hour with host Earl Ofari Hutchinson on KTYM 1460 AM Los Angeles on December 9, David Frum, Editor of FrumForum.com

EOH:   Will Newt Gingrich be the GOP nominee?

DF:       My guess is no.  Gingrich has a lot that appeals to Republican primary voters.  They like that he helped take back the House of Representatives in 1994 and his confrontational style.  But there are a lot of worries about him, strongest among those who know him best.  In Washington he is not known as an effective leader, not well organized, not disciplined.  The man is not good at disciplining himself, which you need in a Presidential campaign.  The Republican campaign is going to be long because they have moved away from their “winner take all” rules.  If you win in New Hampshire, Iowa or South Carolina, you get the majority of the delegates, not all of them.  That’s one thing that kept the Democratic contest going so long in 2008.  Mitt Romney gets stronger the longer the clock runs.

EOH:   If Gingrich moves ahead, does he have a network and/or can he build one in time?

DF:       There isn’t really time to build it, and no, he doesn’t have it.  In the age of social media, especially fox news, which is a social media for Republicans, they feel these things are less important than they used to be.  Here’s what he doesn’t have; He doesn’t have money and is having trouble raising money, and he doesn’t have the network of endorsements.  There are a lot of important Republican politicians who are going to be out in the cold if Gingrich wins because they bet so heavily on Romney.  And they’re not going to like that.

EOH:   Does Mitt Romney look at Gingrich as a major threat to him?

DF:       They are doing negative ads which is a departure for them, but they have been in this situation before.  Some candidates have been “flavors of the month”, obviously they were never going to be the nominee.  But it was not impossible that Rick Perry might have been the nominee.  He fell apart because of his own mistakes.  Had he not made the mistakes, he can raise a lot of money, he’s won a lot of elections, he knows politics.  Perhaps if the format had relied less on debates, where his lack of knowledge was caught, and relied more on advertising and fundraising, he might have done better.  Romney has confronted an incredible challenger before and he sawed him off.  In many ways Perry is a stronger candidate than Newt because Perry is less disliked by the Washington Republican leadership.

EOH:   As Gingrich moves closer to the top, are we going to see the press looking at his old baggage?

DF:       Nobody knew anything about Herman Cain when he came out as the Republican front-runner.  There is a voracious appetite for public information and if you engaged in misconduct in the past, it comes forward as news.  Gingrich is a well-known figure.  The issue is not things that people don’t know, but what people used to know that they’ve forgotten.  The media is going to have to investigate the story of his marriages, people know that.  What they once knew and forgot was his record as leader of the Republican House of Representatives.  There were mutinies against his leadership because it wasn’t very well handled and he finally had to step down.  If you nominate Newt Gingrich, you end up running against the Clinton record as well as Obama.  The 90’s become relevant.  Gingrich is best known as the man who impeached Bill Clinton.  We are going to end up re-debating those whole issues again.  President is the encumbant in a time of deep economic crisis.  Do you want to talk about that record, or bring Clinton back into the picture who was president during a time of prosperity and argue why did you impeach this president?

EOH:   I’m looking at a news column headlined “Cry Baby” about Newt’s tantrum because Clinton made him sit at the back of the airplane.

DF:       That is an example how Newt gets into trouble.  We had a budget crisis in the 1990’s about how to balance the budget and the issue was should beneficeries pay a higher premium.  In the middle of this crisis the primeminister of IOsreal was assassinated and President lead a delegation to the funeral.  Air Force One is divided into three compartments; the front for the President alone, the middle compartment for the White House Staff and the last for visiting dignataries.  You have to be invited and brought into the Presidents cabin.  Gingrich wanted to talk to the president but the President didn’t have time.  When the plane got back., Gingrich gave a press conference and people asked why aren’t you negotiation with the president and Gingrich said there was lots of time on the flight, but he didn’t make time to talk to me.  Whenever you put a microphone into his face and and ask a question, he answers it, and it’s not always a good thing for a Politician to do.

EOH:   Are we going to see a re-run on the actions of Mr. Gingrich regarding confronting his wife in her hospital bed?

DF:       I think those are not the issues that are going to haunt him.  What will haunt him is did he do a good job or not running the Republican caucus.  In an interview he said I wish everybody liked me, but I’d rather be effective to the American people.  The problem is that among Republicans I because they think he wasn’t effective.

EOH:   What is your response to the comment that the party is weak because it has “dumbed down” the job?

DF:       I think it’s hard to look at the way this race has gone and how Mitt Romney has met resistence without feeling like religion is a big issue.  Romney I facing a problem because of his Morman faith.  It seems he performs worst with Evangelicals and there is resistance to his campaign,  He does betterin states where there is relatively little Evangelical religion and poorly where there’s a lot of it.  That’s one division.  It points to other currents.  He does well among well among the affluent and not so well among the non-affluent Republicans.  The appeal Romney makes is that he is a guy who is good at running things.  He is good at making things go.  He’s not a confrontational person.  The other candidates have not had Romney’s experience at running things, but they do have a lot of emotional intensity.  That’s a choice the Republicans have to make, what is the job of the president and what type of person do you want in that role?

EOH:   If Romney gets the nomination, will he do better in a head to head contest with the President?

DF:       I think that’s right.  President Obama is heading into a very tough election cycle, and with what is happening in Europe, there are a lot of reasons to fear that 2012 will be an even worse economic year than 2011 and 2010.  This will be our 5th tough Christmas in as row, and the economy has been toughest on Obama supporters in 2008; minorities and the young.  They are demoralized, depressed, and may have changed their addresses and dropped off the voter registration roles.  In that case, people will be looking for an alternative, and Mitt Romney is the alternative.  The battle for the incumbent is to make the challenger more unacceptable.

EOH:   If Mitt Romney is the GOP nominee, can he bridge the gap and get everyone in the fold?

DF:       Yes, he’ll be able tp pull together the party.  The key question for 2012 is not being done right now by Romney or PREsident Obama.  It’s the events in Europe.  If they can save teir currency, the markets will be so excited we will see financial recovery and optimistic news starting 2012.  If they continue as is or fail, Europe will move into recession and we will feel the economic pressure.  If it slips downward in 2012, the incumbent is in trouble.