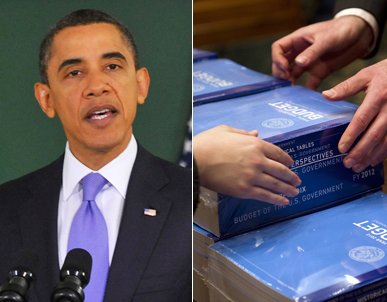 President Obama’s proposal to put Medicare and Social Security back on the budget bargaining table ignited a virtual palace revolt among administration loyalists. The flashpoint is the proposal to tie Social Security payments to a chained CPI. The chained CPI which uses the most tight fisted measure to gauge inflation would by all estimates gradually erode the purchasing power of millions of seniors over time by minimizing the impact of inflation. Putting Social Security on the bargaining table is tantamount to playing political Russian Roulette with a GOP that might this time around snatch at it in its relentless drive to hack away programs that directly benefit the poor and working class.

Obama is well aware of the peril that the GOP might say yes to the proposal, and that even putting it on the table as a bargaining chip would cause the firestorm of rage from supporters. But this is not the first time that Obama plopped Medicare and Social Security on the budget bargaining table. The last time he agreed to change the Social Security calculus it went nowhere. In part it was because the GOP said no. It argued that this was a half way measure that would not raise enough revenue. And in part because it was a publicly stated quid pro quo concession to get the GOP to back his demand for more tax increases that target the rich.

Obama had little choice but to take the risk with Social Security again. There is little chance that the GOP House leadership will cave on his demand for more tax increases, and the odds are equally slim that the GOP House leaders will back away from their demand to cut deeply into the array of programs from Head Start to child nutrition programs that will further devastate the poor and working persons.

The pressure to get some kind of budget deal through Congress that hasn’t passed a complete budget in years is ferocious. This can’t be divorced from the fierce political jockeying to get control of Congress. The GOP’s goal is to grab enough seats from vulnerable Democrats to take control of the Senate. The Democrats in turn want control of the House. The GOP banks that an administration hamstrung with a major deficit and a budget impasse will heighten public anxieties about the budget and spending and thus weaken Democrats. The Democrats in turn will continue to finger-point the GOP as the bad guy in the budget drama.

Obama quickly slapped the tag “compromise” on his budget proposal with that in mind. A GOP rejection, which is likely, will allow him to again tar the GOP as the main impediment to a budget deal. Obama put an added backstop into his budget proposal that would cut corporate special interest subsidies, increase taxes on tobacco, and safeguard and expand programs such as greater access to education for infants that aid the poor and working class. This was a sweetener to temper the storm from liberal Democrats and the advocacy groups on his proposed Social Security and Medicare cuts and changes.

During the initial budget war two years ago, the GOP gave Obama little room to maneuver. Much of the public bought into the GOP's bogus line that Obama's alleged reckless spending was hopelessly drowning the government in a sea of red ink. Nervous foreign investors as well as a slew of financial experts and economists endlessly claimed that the budget deficit would continue to soar and the nation would be saddled with higher taxes; deeper cuts in education, health and social services; staggering permanent debt; and possibly even bankruptcy. The Simpson-Bowles commission had bipartisan support and a mandate to come up with a sweeping deficit reduction plan. It targeted Social Security and Medicare as the main culprits draining the budget. The commission claimed that a chained CPI reconfiguration of Social Security payments would result in a savings of more than $400 billion. The inference was that anything short of this would insure the ultimate collapse of Social Security and by extension other cost cutting programs.

This doomsday scenario was part political hyperbole, part financial panic. Even then many economists noted that the claim of financial Armageddon was way overblown. The projected deficit was about 10 percent of gross domestic product. This would be great enough to threaten economic growth if it were sustained for decades. Yet even that supposedly doomsday estimate was proportionally far smaller than the deficits that the United States ran during and immediately after World War II.

But the clamor for a budget deal, a GOP doggedly unrelenting on tax hikes on the rich, and the 2014 mid-term elections around the corner, has made the budget battle a high stakes game. Obama’s gamble on Medicare and Social Security makes sense given those hike stakes.

Earl Ofari Hutchinson is an author and political analyst. He is a weekly co-host of the Al Sharpton Show on American Urban Radio Network. He is the author of How Obama Governed: The Year of Crisis and Challenge. He is an associate editor of New America Media. He is the host of the weekly Hutchinson Report on KTYM 1460 AM Radio Los Angeles and KPFK-Radio and the Pacifica Network.

Comment by William R. Clarfke on April 7, 2013 at 7:50pm
Excellent. Really like the background given how Congress has been butting political heads over the budget for the last several years. Vested interests seem more important than the overall health of the nation. "Without a Vision the People Perish" Vision is what Congress sorely lacks.

I agree that this is a good move in the high stakes game of chicken with the US Economy.  I just wonder what will happen when the GOP rejects this move.  At best, their rejection will set up a perfect strategy for winning back the US House in 2014.  If they reject this offer, they will be cast again in the role of the bad guys.

As they say in some circles, the President may be offering the GOP the "sleeves from his vest."  Everybody knows some adjustment must be made in Social Security, Medicare and Medicaid.  The Affordable Care Act has made strong moves toward addressing Medicare and Medicaid.  This move on Social Security is the "least painful" approach to addressing the cost curve for Social Security.  And the GOP has a good chance of rejecting this offer.  So, hte President comes away clean, even with the howls from his Progressive and Liberal supporters.

In any case, as the say in Tennessee, "Keep your powder dry."  This has a long way to go.