No Easy Answer for President Obama on Hadiya Pendleton’s Funeral 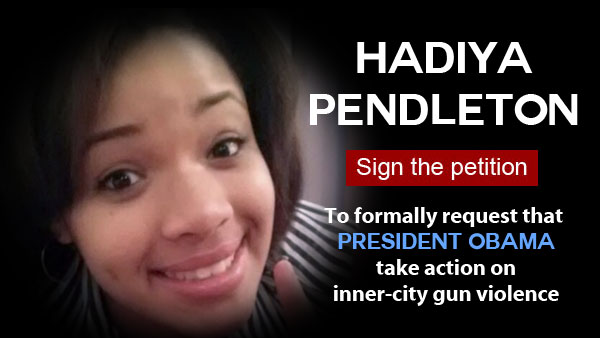 The clamor continues for President Obama to attend the funeral of 15 year old honor student Hadiya Pendleton gunned down on a Southside Chicago street. There’s even an online petition on the White House website imploring Obama to attend. The petition delicately sidesteps the issue of race and whether black lives are less valued than those of whites. But the glaring fact is that Pendleton’s murder unlike that of countless other virtually nameless and faceless young African-American victims of murder violence in Chicago and other inner city neighborhoods made national news because she had returned to Chicago just days earlier from performing at Obama’s inaugural festivities.

Obama has certainly not ignored Pendleton’s horrendous murder. He deplored the killing and offered compassion and support directly to her family. The family has publicly expressed their appreciation for his outreach to them. However for many that’s simply not enough. The constant carp is that Obama went to Aurora, Colorado and Newtown, Connecticut and expressed sympathy for the victims of the mass slaughter in both places. They incessantly remind that blacks, and that foremost includes blacks in Chicago, have been the biggest, most enthusiastic of his supporters, and in several states pivotal to his election and reelection triumphs.

The heavy inference is that Obama owes blacks more than just distant words of support, but concrete action. And since gun violence has been a relentless and horrific plague in poor black communities, and he’s on a crusade against it, Pendleton’s funeral should be a mandatory stop for him to send the strong message that black lives are just as important as any others.  These are painful points to ponder.

But the Pendleton killing as shocking and horrendous as it was, and like the hundreds of other blacks gunned down in Chicago streets the past couple of years, is no different than other controversial cases that involve apparent racial issues. In every case, Obama has been pressed to speak out on, and in this case, show up on.

The push for Obama to attend Pendleton’s funeral, though, begs the question of whether he has a special obligation to appear at every victim of violence’s funeral.  The answer is no. Obama, as all sitting presidents, almost always avoids involvement in controversial local issues, and that’s the key. Murder violence is a local issue, handled by local authorities, and local communities, and for presidents to interfere is to step into a political minefield that would do far more harm than good. It would violate the rigid separation of federal and state powers. It would open the floodgate for any and every individual and group that has a legal wrong, grievance, or injustice to expect, even demand, that the president speak out on their cause. And in the case of a local neighborhood murder that garners news mention, the demand that the president attend the funeral of the victim and show support. After all, if he did that for one victim, he’d always be slapped with the demand that he do it for other victims.

Even presidential statements on a controversial issue have polarized, and fueled political backlash. In fact, the Pendleton slaying is a near textbook example of the fury and passion that racial leaden cases and issues always stir. Obama is African-American and there’s rarely been a moment during his tenure in the White House that he hasn’t been relentlessly reminded of that. The one time that he gingerly ventured into the minefield on a racially charged local issue was his mild rebuke of the white officer that cuffed Harvard professor Henry Louis Gates in 2009. The reaction was instant and rabid. Polls after his mild rebuke showed that a majority of whites condemned Obama for backing Gates and, even more ominously, expressed big doubts about his policies.

The murders in Chicago on the surface do not appear to have any racial implications. But underneath they do because they raise painful questions. Why do so many young blacks wantonly wreak mayhem and murder on their own? Why do police and public officials often seem helpless to stop the killings? Why is it that so many young black males feel so abandoned, hopeless, and alienated from society? What part do the towering problems of failing public schools, Great Depression joblessness among young black males, and the relentless cutback in family support and skills training programs have in escalating the violence? Should the victimizers solely be blamed for the violence or is society a culprit too in failing to deal with the social and economic crisis in ghetto communities?

The Pendleton murder cast another horrific glare on the gaping racial disparities in how the lives of young blacks slain in inner city neighborhoods in contrast to those of suburban whites are publicly viewed and treated. It stirred a soul search on how the lives of young blacks are routinely devalued by so many, and the need for renewed local and national action to be taken for that to end. There are no easy answers to the plague of black murder violence whether Obama personally attends Pendleton’s funeral or not.

Earl Ofari Hutchinson is an author and political analyst. He is a weekly co-host of the Al Sharpton Show on American Urban Radio Network. He is an associate editor of New America Media. He is host of the weekly Hutchinson Report Newsmaker Hour on KTYM Radio Los Angeles streamed on ktym.com podcast on blogtalkradio.com and internet TV broadcast on thehutchinsonreportnews.com. Follow Earl Ofari Hutchinson on Twitter: http://twitter.com/earlhutchinson