Missing the Point in Knocking Obama on Diversity 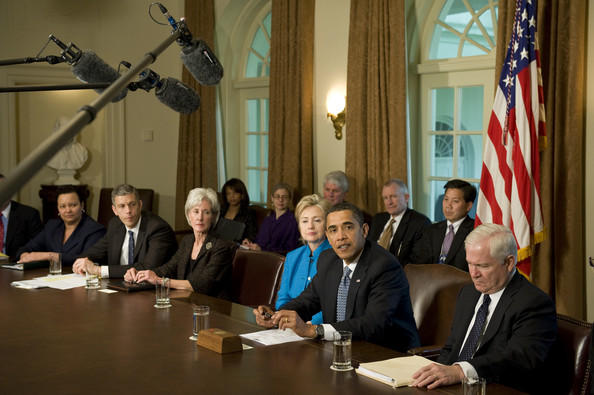 The NAACP and the National Hispanic Leadership Agenda were gentler than earlier critics, but no less incessant that President Obama had a duty and obligation to appoint more blacks and Latinos to cabinet and staff positions, and the Supreme Court. Unlike the earlier knocks against Obama for his alleged lack of diversity in his appointments, the civil rights groups put an exact number on how many blacks and Latinos they want him to appoint. They demanded that he name three Latinos to his cabinet from a list of nearly two dozen Latino politicians. The NAACP demands that he appoint a black woman to the Supreme Court.

The point, in fact several points, missed in their demands is the same as before. Obama has appointed more women and a sizeable number of minorities to a range of agency and staff positions in the last four years. It’s still early in the game of appointments. There will be lots of administration shuffles and vacancies in the coming months and Obama will have ample opportunity to do what the critics demand that he do and make more minority appointments. It’s true there are legions of minorities that are eminently qualified based on their experience and education to hold administration positions.  But having the right qualifications for a position is not the sole criteria for a cabinet or staff pick.  Obama, like all presidents, will appoint those who are consummate team loyalists and will be faithful arbiters of administration policy and directives, and most importantly do nothing to embarrass the administration.

The bigger problem, though, is that Obama still walks the thinnest of tightropes on race, and presidential appointments are hardly an exception to that. He has never strayed from the set in stone premise that his administration would have even less chance of getting anything done with an intransigent GOP, and  a divided and polarized electorate, if his administration was perceived as turning attaining racial parity into a crusade. It wouldn’t take much for the professional Obama bashers to tag the label of closet racial agitator on  him.

He recognized that peril from the start of his first presidential campaign in 2007. In announcing his candidacy, he made only the barest mention of race. The focus was on change, change for everyone. He had little choice. The institution of the presidency, and what it takes to get it, demands that racial typecasting be scrapped. Obama would have had no hope of winning the Democratic presidential nomination, let alone the presidency, if there had been any hint that he would use the White House as a bully pulpit on racial injustice.  His campaign would have been marginalized and compartmentalized as merely the politics of racial symbolism. The month after he got in the White House he mildly chided Attorney General Eric Holder for calling Americans cowards for not candidly talking about race.

Presidential candidate Obama initially clung tight to the centrist blueprint Bill Clinton laid out for a Democratic presidential candidate to win elections, and to govern after he won. The blueprint required that the Democratic presidential candidate tout a strong defense, prosecute a relentless war against terrorism, a vague plan for winding down the Iraq War, tepid proposals to control greenhouse emissions, mild tax reform for the middle class, a cautious plan for affordable health care, pro-business solutions to joblessness, and make only the most genteel reproach of Wall Street.  Obama radically altered the script once in the White House in pushing hard to rein in Wall Street greed, proposing huge increases in job training and infrastructure spending, and waging an aggressive fight to preserve Medicare, Medicaid and Social Security, radically expanding health care for millions, and pushing for tough climate control measures.

Yet, moving left on these issues has not shielded him from the rap that he hasn’t done enough on the towering crisis issue of black unemployment. It’s reached Great Depression levels among young black males. He’s got an earful from many black groups that demand he frontally address the issue. He almost certainly will hear more on this in the months to come. His answer that a robust economy is the ultimate answer to damping down black unemployment is in part true, but that won’t satisfy the clamor for more visible and vocal White House initiatives and programs to boost the black poor with all the political risks that that brings.

As all presidents, Obama is pulled hard by corporate and defense industry lobbyists, the oil and nuclear power industry, government regulators, environmental watchdog groups, conservative family values groups, conservative GOP senators and house members, foreign diplomats and leaders. They all have their priorities and agendas and all vie hard to get White House support for their pet legislation, or to kill or cripple legislation that threatens their interests.

Obama's refusal so far to bow to the demand to appoint a set quota of black and Latino appointees to his cabinet and the Supreme Court has everything to do with the price of White House governance. That price is a thoughtful, measured, and above all, a race and gender balanced presidency.

For those critics unfamiliar with the rare air in the rooms at the highest levels of power, the place to look is the pipeline.  It is not often that one "leapfrogs" the process and winds up at the top -- not even with a Black President at the head of the table.  Those who need to be there when the toughest decisions are made must prepare for that role.  Otherwise, their perspective is limited, and their awareness of widespread consequences of their decisions is absent.  The President's Cabinet is not the place for OJT.

My hope is that President Obama and the few of us in the inner circle are also working to develop a pipeline of candidates so that future leaders have a wider and deeper pool of talent to choose from.