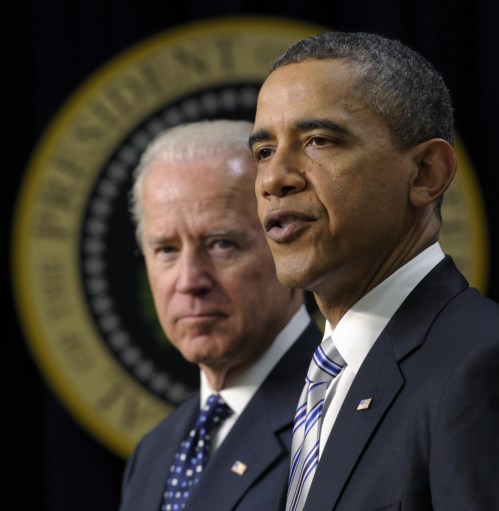 Hillary Clinton spokesman Philippe Reines turned faux rapper when he thumped out a rhythmic message to the press vehemently denying that there have been any meetings, back room deals, or nervous talk at the White House about dumping Joe Biden and replacing him with Hillary. Reines had to move quickly to squelch the incessant media chatter about a Biden exit for two simple reasons. One it’s not going to happen. Even if Hillary hadn’t repeatedly and vehemently said it wasn’t going to happen, history has shown presidents almost never dump their VPs in the midst of their reelection bid. Only one president in the past seven decades has switched VP’s in midstream. That was FDR in 1944 when he dumped VP Henry Wallace under pressure because of Wallace’s much too pronounced leftist politics and utterances. Harry Truman got the replacement nod and the rest is history.

The only other VP that bowed out of an administration in midstream was Spiro Agnew in 1973. He was President Nixon and the GOP’s sacrificial lamb. He faced a criminal indictment on bribery charges and resigned as part of a plea deal to avoid a prison stint.

Presidents don’t change VP’s especially in the middle of a tough reelection battle for obvious reasons. No incumbent has ever won or lost the White House based on the politics, ideology, or personality of their VP.  They do not have that kind of power or authority. VP’s serve at the pleasure of the president and do his bidding; no more, no less. A switch of VP’s in the midst of an election would signal utter desperation, campaign chaos, and panic. This would be the near political kiss of death for a president.

The other reason is Biden. He is and will remain on the ticket for precisely the reason that he was picked by President Obama in the first place. He is a hard hitting, policy knowledgeable advisor and point man. The supposed gaffes that he has made are anything but that. They are well-scripted, thought through political set pieces carefully designed to convey a serious and politically enhancing policy stance by Obama. Take the two blurts that got him in supposedly hot water.  The first was on gay marriage. Biden was roundly slammed for getting out ahead of Obama in endorsing gay marriage. This supposedly forced Obama to follow suit before he was ready. But gay groups are integral to Obama’s reelection drive. They provide enthusiasm, growing vote numbers and major funding. The price for firming up their support was a full throated endorsement of gay marriage. Anything short of that, and that included a further delay on endorsing it, would have been politically risky for the president. Biden just said and did what Obama had to do.

The same is true of Biden’s “chains” quip. The slave skewed imagery was simply dramatic reaffirmation of the Obama campaign’s center hit piece against Romney. And that’s that a GOP White House will tank the economy, and wreak untold economic misery on the poor and minorities. This has and will be repeatedly incessantly by Obama and every other Democrat all the way up to November 6. It will almost certainly be repeated in even harsher terms than Biden could muster.

Then there’s race. It’s a volatile minefield that can explode in a presidential election even when it appears not to. This was the case in Obama’s White House win in 2008.

A Harvard researcher found that race cost Obama 3 to 5 percentage points of the popular vote in the 2008 election. If race had not been a negative factor in the election, Obama’s win over GOP presidential foe John McCain would have been a walkover in the popular vote. The even more troubling thing is that the loss of white support came largely from many conservative white Democrats, who simply stayed home rather than vote for Obama. In an AP-Yahoo poll, one-third of white Democrats said they had negative views of blacks. More than 40 percent of them said they would not back Obama.

Biden can play a big role here. He’s from a Border State. He is a solid in fighter in the trenches, and hails from a blue collar background. He can and will be an important bridge to try and keep conservative blue collar white Democrats from straying from the fold. He’ll keep hammering hard with them that despite their racial reservations about Obama, the threat of a Romney-Ryan hack up of Medicare, Medicaid, and Social Security, and labor protections pose a far greater danger. He will not use polite language to make that point, nor will he be expected to.

Biden’s active appearances at black and Latino gatherings, his rough language, and his policy expertise are a huge plus for Obama in a down and dirty campaign. Any talk about dumping Biden is just that, talk. The likelihood is even that won’t last much longer.