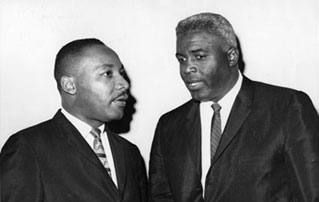 Jackie Robinson’s civil rights commitment and political involvement was so deep that he demanded and got meetings in 1960 with presidential contenders Richard Nixon and John F. Kennedy. Both actively courted him for his endorsement. He finally chose to support Nixon. Many blacks blasted Jackie Robinson as an "Uncle Tom" and "sellout" for supporting Nixon. But the Nixon of 1960 wasn't the Nixon of 1968 who inflamed law-and order sentiment, and pandered to racist, white Southerners. As Dwight Eisenhower's vice president, Nixon vigorously fought for the civil rights bills of 1957 and 1960 and for stronger action against racially motivated violence. The Kennedy of 1960 wasn't the Kennedy of 1963 who took forceful civil rights action. As a senator, he voted to water down a section of the civil rights bill of 1957 and actively courted racist southern Democrats. Robinson promised that if his candidate betrayed him on civil rights "I'll be right back to give him hell." He did. He denounced the political mean-spiritedness of Nixon. "Every chance I got I said plainly what I thought of the right-wing Republicans and the harm they were doing."

During the next decade, Robinson gave speeches, helped raise funds, and made generous contributions to the NAACP and the Southern Christian Leadership Conference. But in 1967, he resigned from the NAACP's board of directors accusing it of being "insensitive to the trends of our times, unresponsive to the needs and aims of the black masses--especially the young--and more and more they seem to reflect a refined, sophisticated, `Yassuh, Mr. Charlie, point of view." His criticism foreshadowed the identical charges made by dissidents that would nearly wreck the NAACP almost two decades later.

Like many then, Robinson at first regarded Malcolm X as an anti-Semitic, race-baiting demagogue and criticized his approach to racial problems. But in time he came to respect and admire Malcolm X: "Many of the statements he made about the problems faced by our people and the immorality of the white power structure were the naked truth."
He staked his career and reputation on making black economic empowerment a reality. He believed, "There were two keys to the advancement of blacks in America—the ballot and the buck. If we organized our political and economic strength, we would have a much easier fight on our hands."

In 1972, Robinson refused to attend an old-timers game and accused baseball owners of running "a big selfish business" for refusing to hire blacks as managers, coaches and front-offices executives. More blacks are top coaches and hold front office position in MLB today, but Robinson still might not be satisfied with that, and demand even more be done to attain full equity in the sport.

Robinson got the break of the century when he was chosen to smash the color barrier. He was courted by politicians, showered with personal honors and attained a measure of financial success.

But at the end of his life he realized that many blacks had continued to lose ground: "I can't believe that I have it made while so many of my black brothers and sisters are hungry, inadequately housed, insufficiently clothed, denied their dignity, live in slums or barely exist on welfare."

To the end of his life, Robinson insisted that he never had it made. He’d likely say the same today. That’s the Robinson that baseball, and much of America, has forgotten. #42, tells only part of his story.

Earl Ofari Hutchinson is an author and political analyst. He is a weekly co-host of the Al Sharpton Show on American Urban Radio Network. He is the author of How Obama Governed: The Year of Crisis and Challenge. He is an associate editor of New America Media. He is the host of the weekly Hutchinson Report on KTYM 1460 AM Radio Los Angeles and KPFK-Radio and the Pacifica Network.