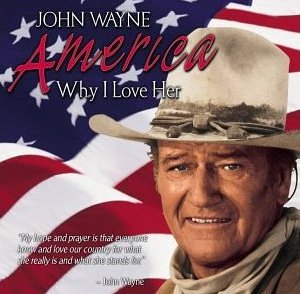 The California State Assembly rejected a John Wayne Day resolution authored by Orange County Republican Assemblyman Matthew Harper because Wayne said in a Playboy interview in May, 1971 he believed in “white supremacy.” As bad as that was it was just the tip of the iceberg of Wayne’s hard core mean spirited, ultra-racist views about African-Americans. Despite the California Assembly’s rejection of the Wayne Day, Wayne is still America’s much revered super-hero, icon and symbol of American values.

Here’s America’s icon’s views about African-Americans that his “white supremacy” quip only barely scratched the surface with. Read and judge for yourself:

PLAYBOY: Angela Davis claims that those who would revoke her teaching credentials on ideological grounds are actually discriminating against her because she's black. Do you think there's any truth in that?

WAYNE: With a lot of blacks, there's quite a bit of resentment along with their dissent, and possibly rightfully so. But we can't all of a sudden get down on our knees and turn everything over to the leadership of the blacks. I believe in white supremacy until the blacks are educated to a point of responsibility. I don't believe in giving authority and positions of leadership and judgment to irresponsible people.

PLAYBOY: Are you equipped to judge which blacks are irresponsible and which of their leaders inexperienced?

WAYNE: It's not my judgment. The academic community has developed certain tests that determine whether the blacks are sufficiently equipped scholastically. But some blacks have tried to force the issue and enter college when they haven't passed the tests and don't have the requisite background.

LAYBOY: How do they get that background?

WAYNE: By going to school. I don't know why people insist that blacks have been forbidden their right to go to school. They were allowed in public schools wherever I've been. Even if they don't have the proper credentials for college, there are courses

PLAYBOY: But isn't it true that we're never likely to rectify the inequities in our educational system until some sort of remedial education is given to disadvantaged minority groups?

WAYNE: What good would it do to register anybody in a class of higher algebra or calculus if they haven't learned to count? There has to be a standard. I don't feel guilty about the fact that five or 10 generations ago these people were slaves. Now, I'm not condoning slavery. It's just a fact of life, like the kid who gets paralysis and has to wear braces so he can't play football with the rest of us. I will say this, though: I think any black who can compete with a white today can get a better break than a white man. I wish they'd tell me where in the world they have it better than right here in America.

PLAYBOY: Many militant blacks would argue that they have it better almost anywhere else. Even in Hollywood, they feel that the color barrier is still up for many kinds of jobs. Do you limit the number of blacks you use in your pictures?

WAYNE: Oh, Christ no. I've directed two pictures and I gave the blacks their proper position. I had a black slave in The Alamo, and I had a correct number of blacks in The Green Berets. If it's supposed to be a black character, naturally I use a black actor. But I don't go so far as hunting for positions for them. I think the Hollywood studios are carrying their tokenism a little too far. There's no doubt that 10 percent of the population is black, or colored, or whatever they want to call themselves; they certainly aren't Caucasian. Anyway, I suppose there should be the same percentage of the colored race in films as in society. But it can't always be that way. There isn't necessarily going to be 10 percent of the grips or sound men who are black, because more than likely, 10 percent haven't trained themselves for that type of work.

PLAYBOY: Can blacks be integrated into the film industry if they are denied training and education?

WAYNE: It's just as hard for a white man to get a card in the Hollywood craft unions.