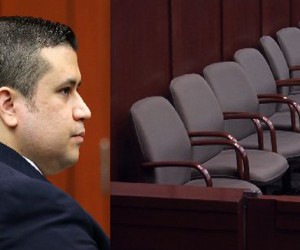 George Zimmerman trial juror b37 flatly said that there was no doubt that Zimmerman feared for his life when he killed Trayvon Martin. When she said that, she reconfirmed two deep and troubling facts about the Zimmerman trial and the criminal justice system. One is that she and the other white jurors bought the contention Zimmerman’s defense attorneys and legions of his backers ruthlessly and relentlessly drove home. That is that Martin was the assailant and Zimmerman the victim. The even more troubling fact is that she reconfirmed again the glaring racial bias that deeply plagues the jury and criminal justice system when a black is both the victim as was Martin, and in a perverse leap of logic by Zimmerman defenders, the defendant as was Martin.

The Zimmerman trial jury was with one exception all-white. The one juror that was the exception was a non-African-American. That jury reflected the terrible reality that when a black is the defendant or perceived as Martin was as the defendant in a trial with an all-white or a jury with no blacks on it and the victim is non-black or the defendant is white they are far more likely to convict a black defendant than a white one. Florida is one of the worst offenders when it comes to routinely convicting black defendants and acquitting white defendants

One month after Martin was slain by Zimmerman in March 2012, Duke University researchers examined records of more than 700 non capital felony cases in the state from 2000 to 2010. They found what has long been known and that’s that the race of a defendant and victim play a huge role in how a jury is likely to decide a case.  Black defendants by a double digit margin were more likely to be convicted than a white defendant. A major reason for this was that a significant percentage of the jury pools had no blacks on them.  The study found that when juries had even one black on it white and black defendants were convicted at the same rate. The researchers drew one inescapable conclusion and that’s that all-white juries are not only more prone to convict black defendants but that despite court rulings that bar exclusion of jurors or potential jurors because of race, a major number of juror pools and thus juries continue to be all-white.

This amounts to a not so subtle form of jury nullification of the Sixth Amendment right to a trial by a fair and impartial jury. The centerpiece of that is the concept of a jury of a defendant’s peers. All-white juries hardly meet that constitutional standard.

The Zimmerman trial jury was certainly no aberration. It was consistent with the findings that juries in Florida as in many other states are likely not to have any African-Americans seated on them, and that when the defendants are African-American they are routinely convicted. Juror b37’s frank admission that she and the other white jurors thought Zimmerman was under assault, feared for his life, and thus had the right to use deadly force to defend himself was horribly consistent with the findings that juries are much more likely to find whites or non-blacks that beat, maim or kill blacks to be within their rights to defend and or likely to acquit them of charges. This was obviously true in how Zimmerman was depicted as the victim, not Martin, in the minds of the white jurors.

The juror bias study was also consistent with another study that found that whites that claim they kill or maim a black under the stand your ground law are far more likely to either not be charged with a crime or if charged to be tried on lessor charges. Or they are more likely to be acquitted than a black that claims they maimed or killed a white under the law.

In many other Florida counties, as well as countless numbers of counties in other states, the odds are better than average that a jury pool will be predominantly white. In fact, based solely on the population demographics of Seminole County, where Zimmerman was tried, of the 500 persons in the initial Zimmerman trial juror pool, there were 329 whites, 89 Hispanics, and 59 blacks. There were 239 men and 251 women. Defense attorneys that have tried major criminal cases in Seminole County predicted that the composite juror would be a white, professional or business person, and middle aged, male and female, and Republican. The only part they were wrong on was the gender make-up. But they were right on the near total absence of racial diversity of the jury. Duke researchers meticulously and painfully showed in their juror study months before Zimmerman’s acquittal by a jury with no blacks that when it comes to guilt or innocence of a defendant who is non-black white jurors will acquit. As juror b37 bluntly said she believed that Zimmerman’s "heart was in the right place" when he shot Martin.