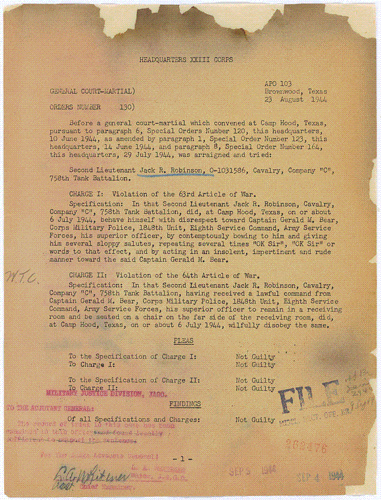 For five hours on August 8, 1944, the young second lieutenant stood nervously before an all-white nine judge military jury panel at Camp (now Fort) Hood, Texas. He faced multiple charges in his court martial proceedings. His only real offense was that he had defied a segregation mandate. While he rode on a bus back to his base camp, he refused to move to the back of the bus as all blacks were then required to do. Though the army had reduced the charges against him to two counts including insubordination, a conviction would have meant his bounce from the military and possible imprisonment. Fate, and his fame as a star athlete and vigorous protest from the black press and the NAACP, was with him. After lengthy testimony, the second lieutenant was acquitted. But he was not completely out of the legal woods, because of his court martial he was barred from seeing action with his tank unit overseas.

Jackie Robinson never forgot that bitter experience. He talked often about it in years to come. He took special pride in taking a stand against injustice even though it could have cost him his freedom.

This is the Robinson that is seldom mentioned in the countless tributes, testimonials, and celebrations of his smashing baseball's color barrier. The Warner Bros biopic #42 on Robinson celebrates that towering achievement.

But 66 years ago on April 15, 1947, when Robinson nervously stood at second base in his first game in the majors he described his feelings as "uneasy" and far less hopeful that his feat would change American attitudes toward blacks. Twenty-five years after that historic day in 1947 Robinson's unease became bitter doubt. In his immortal and provocative autobiography, "I Never Had it Made," he pulled no punches in saying so: "I cannot stand and sing the anthem. I cannot salute the flag. I know that I am a black man in a white world. I never had it made." This is the other story Robinson told in his autobiography, and letters and columns in the New York Post and the Amsterdam News, and most importantly his tireless civil rights activism. This started two years after he broke the color barrier. In 1949 black singer/activist Paul Robeson made an ill-timed and much distorted statement that blacks were sympathetic to the Soviet Union. Robinson was pressured to testify before the witch-hunting House Un-American Activities Committee to refute Robeson. Robinson did not want to be used as a black pawn to attack Robeson.

In his testimony he opposed communism, criticized the committee for its "partisan politics" and fiercely attacked racial discrimination: "We're not going to stop fighting race discrimination in this country until we've got it licked." Years later he did not regret his testimony but he told why he "would reject such an invitation" if it had been offered at a later date: "In those days I had much more faith in the ultimate justice of the American white man than I have today." These were words that more often than not got Robinson in hot water with the press and the baseball establishment. In #42 Never Had it Made Pt. 2, Jackie’s civil rights activism becomes a national issue.