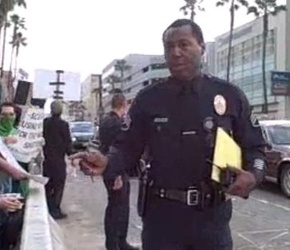 I don’t know if you will read this message, but if you do, I hope that you will take the time to read it and perhaps consider what I have to say.

I am 56-years of age. I hold the rank of Sergeant in the Department and I have 31-years of service with the LAPD.

As a young child growing up in Watts and witnessing one of the worst insurrections of its period (the Watts Riot of 1965), I sought to make a difference in my community through my association with the Los Angeles Police Department.  This was the same organization that had contributed to the hostility of social and racial injustice within my community.  I felt that I could make a difference.  So, in 1968-1974 I became a police explorer scout and from 1974-1979 I was a police student worker and by 1981 to present day I am a sworn member in the LAPD.

I can assure you that when I joined the LAPD in 1981, it was ripe with issues of discriminatory injustice.  But no matter what was occurring around me I had to remain professional and maintain my equanimity and evenness of mind if I was going to survive in what I knew was a racist system.  African Americans around me knew that the elements of racial discord was all around us but many were fearful about addressing the debasing conditions that we were forced to live with, work in, and endure.

The years would pass and the discriminatory actions by the LAPD would be called into question.  Their actions would draw the attention from the people that LAPD had gone too far in the way it policed themselves within the city and within the African American community.  Needless to say, the image and face of the LAPD was forced to change.  Nonetheless, within the LAPD change was going to be a slow and arduous journey. Markedly, by 1997 I would find out just how deep the racism existed within the darkened corridors of the LAPD.  The experience would forever change the way I would express my thoughts about the incidents of racial injustice inside the LAPD.  I had witnessed and personally experienced within the organization acts of blatant discrimination.  Its affect left its victims losing hope; their faces were streaming with tears of despair and their voices crying out screams of desperation.

After encountering racism within the LAPD, I made the conscious decision to be forever vigilant about matters of racial inequality by articulating my thoughts on paper to the powers that be that incidents of racism remain within the organization.  Moreover, when you are out spoken as I have been, you are often shunned and ignored by powerful people along the way.  Hence, you begin to feel that you are not making a difference.  I wrote endless letters and on many occasions I never heard from anyone.  This included the African American commanding officers within the organization that were cognizant of my efforts but chose to placate themselves to the status quo.  Each of them turned their backs and simply looked the other way.

As I continued down the path as a voice crying out for justice within the LAPD, I would witness the changing of the guards of police chiefs.  Thus far, I have worked for a total of 5 chiefs.  Of all the chiefs that I have written to and communicated my thoughts to about racism in the Department, Chief Beck has been the only one that has had the courage to personally respond to my questions about discriminatory matters in the Department.  But that doesn’t mean that it ends there; there’s still much work to be done.  But this is a beginning, and what it tells me is that for the first time in my 31-year career, LAPD has a chief that is willing to provide a listening ear.  Some may say that nothing has changed with the leadership in the LAPD.  But if you’ve never been in a fight with the organization in stirring the soul, conscious and morality of who we are and what we are as an organization regarding race relations, then talk is cheap.  Chief Beck is only one man in a complex and imperfect system that’s trying to make LAPD a better organization.  Trust me I have been in the fight with the organization regarding social and racial injustice within the LAPD.  Currently, I am the only out spoken African American within the organization that possesses the moral courage to confront and ask questions unflinchingly about race, racism and discrimination in the LAPD.  Yet still, I have paid a humiliating price inside the LAPD for preserving and believing in the importance of “I have a Dream.”

Christopher, I ask that you stop your actions my brother.  This is not the answer, nor is this the way to resolve conflict.  Too many people have been hurt and too many innocent families are hurting.  Do the right thing and stop the unwarranted violence and creation of fear.  When you decide that you want to turn yourself in, contact a news station and surrender peacefully so that you are not harmed.  It’s time to put down your weapons of war my brother.