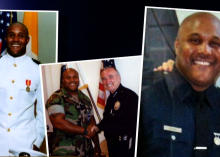 Hutchinson Report Host Earl Ofari Hutchinson on Saturday, February 9, will host a townhall of the air on KPFK-Pacifica Radio (90.7 FM), streamed globally on kpfk.org at Noon PST, 3:00 PM EST examining the public debate over whether Christopher Dorner is a cold blooded murderer or if his claim of being a victim has any merit. Dorner’s manifesto blaming the LAPD for his alleged murderous rampage has sparked controversy and even some public sympathy. The Hutchinson Report will also air calls for his peaceful surrender to prevent any more loss of life.

“Christopher Dorner has become the object of debate over whether there was any justification for his actions and whether he has a case to make for alleged police misconduct,” says Hutchinson, “The show will look at the issues in the debate over Dorner’s actions and urge his peaceful surrender.”